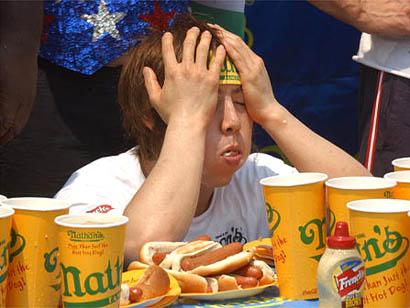 After last year's Nathan’s Famous Hot Dog Eating Contest, six-time world hot-dog-eating champ Takeru Kobayashi declared: "I will definitely beat him next year." His opponent, Joey Chestnut, had won by eating 66 HDB (hot dogs and buns) to Kobayashi's 63. Despite not earning his way in to the contest as a regional qualifier, last year's loser be on hand this year in an attempt to earn back the title.

The Brooklyn Paper (jokingly) says Kobayashi doesn't deserve a shot at the coveted Mustard Yellow International Belt, and calls Major League Eating out for allowing him in through "sponsor exemption." They say the MLE is trying to spin the whole thing, even recalling a 1929 contest in which a contestant was allowed in through a "sponsor exemption." MLE chairman George Shea noted that "Nathan’s has given sponsor’s exemptions in the past, just as, say, Tiger Woods is not asked to qualify for every tournament.”

Like it or not, this Kobayashi kid is back at least one more time! But will his severe jawthritis return, forcing him to eat his words as well as a non-title-winning amount of HDBs? The first hot dog goes down at noon this Friday.