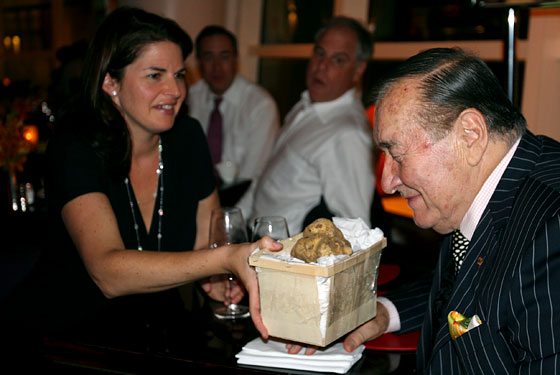 Le Cirque owner Sirio Maccioni made big news recently by dropping $7,000 on a single white truffle, telling the Post, “Once in a while, you have to be crazy.” Indeed, the highly coveted tubers – which at Le Cirque are often shaved sparingly onto pastas or used for tortellini filling – are known to drive chefs and gourmands mad with ecstasy. (Melissa Hom, who took the above photo for Grub Street, snapped a hilarious shot of Le Cirque’s kitchen team partying around Sirio’s huge score.)

This morning we spoke with Sirio’s son Mauro Maccioni, who also runs the restaurant; he estimates that the “perfectly round, pristine” 1.1 pound truffle will yield 60-70 dishes. “I would love a big group of seventy to come in and take the whole truffle for everybody!” He also divulged that this is the most he’s ever paid for one truffle, primarily because “this year the weather is not great in Italy and there’s a huge scarcity of truffles. They found that truffle in Asti near Milan. Once unearthed they rushed it – almost like a patient needing surgery – to the airport and flew it to the U.S., where my father bid for it and got it.”

Maccioni added that connoisseurs eager to taste the Tiffany Diamond of truffles will have to wait just a few more days: “Right now I have some other truffles that I’m going through. But the larger ones keep longer.”