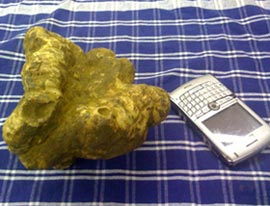 Oh, remember how this time last year Le Cirque owner Sirio Maccioni thought nothing of dropping $7,000 on a 1.1 pound white truffle? Those were the days. Now, with Wall Street rapidly turning into Skid Row, it's hard out there for a truffle.

Last week there was big buzz in the restaurant world when this 2.15 lbs white truffle—dwarfing last year's star—was flown in from Alba, Italy by Mikuni Wild Harvest rep Tyler Gray. He crowed that a bidding war had prompted an offer of $11,000 from an unnamed New York restaurant.

That restaurant, Nello, got cold feet, and Gray seems none too pleased that his jilted truffle is still looking for a home. He writes:

"So it seems that not even the big power house NY Restaurants are immune to the current economic crunch...Restaurant Nello had initially confirmed that he wanted the Truffle, so on Friday we shopped the piece around with no sense of panic….It went to Le Cirque, where they were impressed but nervous to make a bid, it then went down to the new Bouley where it posed in a photo op with Chef David & then over to Corton where chef Paul immediately called his partner Drew to come over and have a peek….all to no avail.

It then went up to Masa & Per Se, Daniel, Gilt & Gordon Ramsey…all of whom bought white Truffles from us, but much smaller ones. All of the chefs who saw it were equally enamored with the gem, but nervous to buy it….at that moment I too was a little nervous, no one likes to have their eggs in one basket. So we went to Nello to give him his prize, and he bailed...

Click though to read more about our brave truffle's picaresque adventures, as it gets repeatedly teased and denied by Nello, insulted by Boulud ($7,000? A slap in the face!), and finally subjected to an even greater indignity: A desperate auction on this very website.

"We gave [Nello] a break in the price but he wasn’t budging. I then alerted all of our sales reps nation wide to push it to every big account they had….Curtis Duffy from Avenues restaurant in Chicago was almost going to buy it, but then realized that a 10,000 invoice may be tough to hide from the F&B department…Matthias from Charlie Trotters was interested, but not quite enough……I was getting a little worried to say the least.

So we got a phone call from Nello last night asking for more White Truffles, he asked if we still had the large one, we told him yes we did, and said he wanted it….so we negotiated a fair price AGAIN and he said bring it by in the morning….we brought it by and guess what happened, he bailed again.

Currently the truffle is still in very good, it was hard as a rock when it first came in and it is still very hard with excellent aroma. A truffle this size and quality will usually last a couple weeks before it starts to deteriorate.

Daniel offered us $7000 for it a couple days ago; Jean Francois is off today, so we will call him tomorrow too see if he is still interested in it…..should we open it up to the public on your blog?"