Kimchi Smoke's "Southern" Korean BBQ Lives Up To The Hype

I haven't barbecue in a while. I haven't had Korean food in a while either. I love both, so I decided to kill two tasty birds with one stone and check out the Kimchi Smoke pop-up on Bowery. And let's just say that after visiting last night, I'm tempted to stop by for the remaining five days of its residency.

There were four items available for Day 1 of their Old Bowery Station pop-up shop: Korean Redneck Tacos; Fat Gangnam Boy; Bad As Texas Brisket; and the Fat Austin Cho. (The menu will change every day.)

I had the Fat Austin Cho first. This was the only offering with their signature Smoked Kimchi and it's the main reason why I'd get it again. If you're already a fan of normal kimchi, this will surely be up your alley. If you're not, this may be a good place to start.

The nice char and associated smokiness rounds out a lot of the more pungent aspects of traditional kimchi and even gives it a sweeter taste. Thank you caramelization! However, the brisket is right behind in second place. This is real deal barbecue. The brisket was extremely tender and had delectable marbling. It was the perfect cut for this sandwich, which also had cheddar, a sweet and tangy FATBOY sauce, and great pickled onions that lent a subtle, peppery flavor and great tartness to cut through the heavy flavors.

The Bad As Texas sandwich is smaller than the Fat Austin Cho. It uses the same brisket as the Fat Austin but with a different cut...a fattier cut. Noms. If you're a fan of no nonsense barbecue, this sandwich will be your closest bet. It has a small splash of the FATBOY sauce and some of those pickled onions on top. The brisket is the real star here.

If you find yourself ordering bulgogi all the time at Korean restaurants, you'll need to try the Fat Gangnam Boy. This sandwich is loaded with a tangy chipotle-style bulgogi, grilled onions, cheese, FATBOY sauce, and regular kimchi. It sounds intense because it is. Think of a Korean Philly Steak—except better. The beef used is very tender and has a succulent bite. This isn't the shaved beef used in your standard Philly. The cheese is what makes this sandwich and will probably be the reason I order this one again. Maybe I can get it with a side of smoked kimchi. 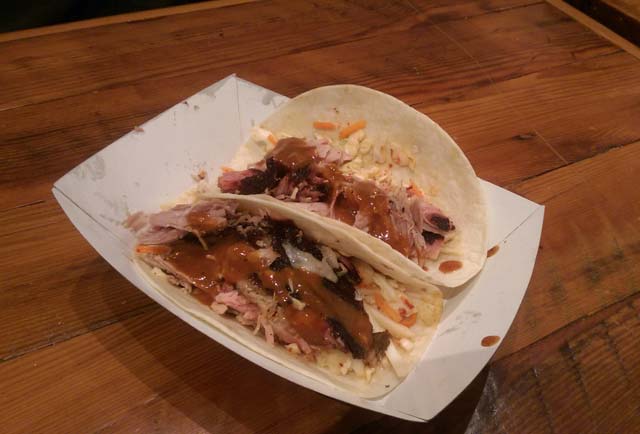 The Korean Redneck Tacos is definitely the lightest option on the menu, with smoked pulled pork, FATBOY sauce, and kimchi slaw. The pulled pork isn't drenched in sauce (thank goodness) but maintains its moisture. The smoke adds a lot of complexity to this otherwise simple dish. The kimchi-like slaw was my favorite part. It's made from cabbage and carrots, similar to Chinese preserved vegetables but with a spicy kick.

Kimchi Smoke's menu for today—Thursday, January 15th—has the Fat Gangnam Boy and Austin Cho, plus the Cholander Fries, which look like this:

Yep, I'll be eating these tonight.

Eric Chung is a video game designer by day, a martial artist by night, but a fatty 24/7

#bulgolgi
#Kimchi
#kimchi smoke
#korean bbq
#original
Do you know the scoop? Comment below or Send us a Tip