Well, we had a good run. Today KFC has made the unsurprising decision to suspend its Oprah-backed grilled chicken giveaway. The overwhelming nationwide demand for free food had depleted KFC's chicken supply to such a degree that the company was actually going to run out of chicken before Mother's Day, which is said to be the chain's most lucrative business day. In this awkwardly upbeat video, KFC president Roger Eaton—who has the weirdest Kentucky accident we've ever heard—explains the crisis, now entering day three:

The Colonel's gonna surprise ya, oy! Basically, if you show up with your coupon and fill out a form, KFC will send a "rain check," which Midtown Lunch derides as "code for forcing you to jump through so many hoops you’ll just give up on the free chicken. Of course that’s not going to happen… did they even see what people went through yesterday for their $4 worth of chicken?" Also, the rain check they promise to send through the mail includes a cool, refreshing Pepsi, so really the only people KFC's dissuading are the homeless, who can't be counted on for future business anyway.

And the disgruntlement continues! A tipster tells us that down at the KFC in the financial district, the manager is "just stopping people at the door and giving them this BS rain check letter. [See below.] A coworker and me went on Wed and waited for 30 but got the food (it was actually pretty tasty) and we decided to go again today and then a couple times next week. But I guess not. I blame Oprah for all this.... And baby seals." 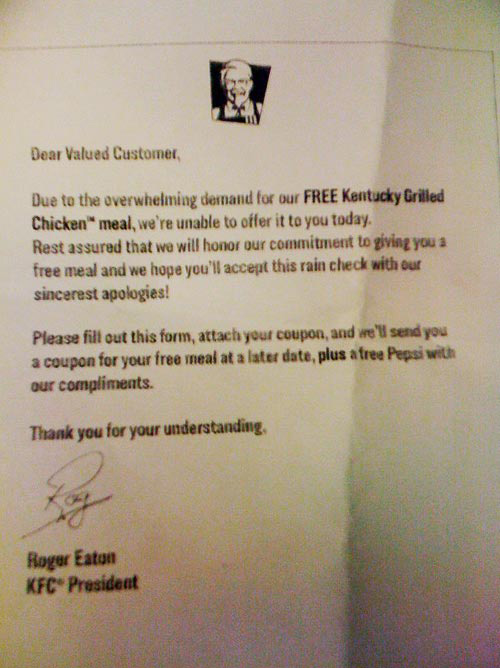 #chicken
#fail
#free
#giveway
#kfc
#suspended
Do you know the scoop? Comment below or Send us a Tip
A new Gothamist is coming! We’ve moved comments over to our beta site. Click here to join the conversation and get a preview of our new website.