Our latest installment of Quick Bites brings us to the Columbia area for some noodles and a promise of "night lunches."

THE VIBE
If social media is any guide, the Junzi Kitchen in New Haven is a favorite spot among Yale students for its noodle bowls, bings, and rowdy "night lunches." Founded in 2015 by three grad students from China, the Yale Junzi seems to have filled a need for lively cheap eats in the Connecticut town. But you know what, folks? This here is New York City, and while it's definitely exciting that a Junzi opened last week in the heart of Columbia/Barnard territory, there's no chance we're letting anyone coast through here on past glories.

The logistics of Junzi Kitchen will be familiar to anyone who's eaten at Chipotle, Sweetgreen, or the dozen other places that have come to dominate the city's fast-casual dining scene. You order at the counter, either concocting your own dish from an array of ingredients on display (meats, veggies, various flavor boosters), or allowing someone else to do the decision-making with one of the "chef recommends" creations. Either way, you'll have your food in about a minute, and then you can grab a spot at one of the communal tables, or at a stool by the window.

The design of the place is clean and fairly minimalist, with that long frontage on Broadway bringing in plenty of light and the energy of the streets. Cute line drawings of food hang over the ordering counter, and the north wall is used as a socially-conscious art gallery, in this case from the W.O.W. Project, which examines the effects of gentrification on Manhattan's Chinatown. I spent many years of my life in this part of Morningside Heights, and despite its contemporary styling, Junzi fits in just fine with neighborhood stalwarts like Mondel's Chocolates, Amir's falafel, and Tom's Diner. 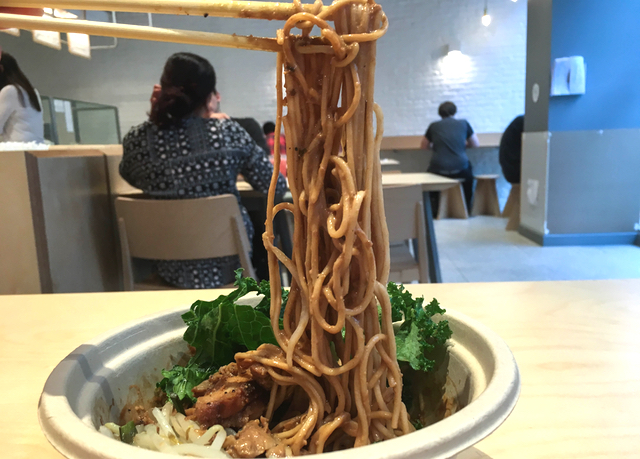 THE BITES
The best part of this whole Junzi-comes-to-NYC story is that the food here is great. Especially the noodle bowls. I stuck with the recommended combinations of everything, figuring the kitchen knows better than me at this point what works best with what, and was rewarded with three terrific dishes. The best thing was the Furu Chicken bowl, the thin, chewy "spring" noodles tossed in a thick sesame sauce, with a pile of wonderfully tender braised bird bits on top, plus bean sprouts and kale for added interest and crunch.

Almost as good was the Tomato Pork bowl. I went with the wider "knife noodles" this time, which were also perfectly prepared and came covered in a hearty tomato-egg sauce and plenty of juicy pulled pork. Intense garlic chives and pickled daikon radish really boosted the level of satisfaction here.

Junzi also makes a chun-bing ("spring pancake"), which is more just like a straight-up wrap, and though this dish not as much of meal as the noodle bowls, the beef bing I ate was delicious. The meat was smartly paired with firm matchstick potatoes as well as bean sprouts and cucumber.

The food menu will expand slightly in the coming days as they add a side dish or two. More intriguing, in a few weeks the restaurant will launch its periodic "night lunches," serving classic Chinese street food (think fried chicken, jianbings, and roasted sweet potatoes) as well as experimental specials from both the Junzi crew and guest chefs. In New Haven these late-night feasts seem to run from 10:30 to 1:00 a.m. and are announced on Instagram, so stay tuned.

And as for their (non-alcoholic) beverage selection, you'll find four different cold teas on tap (the bright pink Hawthorn was tart and refreshing), and a selection of bottled Foxon Park sodas imported from East Haven.

THE VERDICT
Had Junzi Kitchen opened in the early 1980s I would have been here wolfing noodles several times a week. This is a terrific addition to neighborhood, and though Barnard/Columbia students will likely be the most frequent customers, area residents should also put it into their quick-bite rotation.

#junzi kitchen
#quick bites
#Upper West Side
#original
Do you know the scoop? Comment below or Send us a Tip