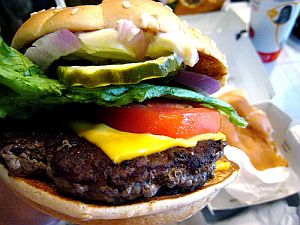 Mayor Bloomberg may have failed with his plan to ease New York City congestion, but at least he can claim victory when it comes to New Yorkers’ digestion. (Sorry.) U.S. District Judge Richard Holwell has ruled that the city can require restaurants with more than 15 locations nationwide to prominently display their calorie information in “the same font and format used to display the name or price of the menu item.”

The New York State Restaurant Association has been fighting the rules in court, arguing that dieters who get distracted by calorie information are more likely to overeat, and that even if the daunting calorie details prompt diners to go for lower calorie items, they'll just end up overeating later because their healthier choice won't really satiate them. Also, they say the rules would violate their first amendment rights. But Judge Holwell decided that the city's insistence on prominent caloric information “is entirely consistent with First Amendment interest.”

New York City Health Commissioner Dr. Thomas R. Frieden hopes “these restaurants will accept the judgment and become part of the solution. Over the next 5 years, this regulation could prevent 150,000 New Yorkers from becoming obese and keep 30,000 from developing diabetes.” The new law will go into effect on Tuesday, and it includes beverages, so at that point you may want to cover your eyes when ordering a mango berry daiquiri at Applebees.