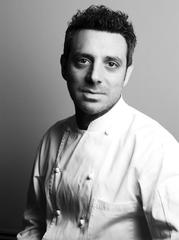 John DeLucie has been entrenched in New York's restaurant scene for well over a decade, with stints at three-star restaurants and high end hotel kitchens along the way. Most recently running the show at La Bottega, he is currently a partner and the chef at the Waverly Inn, where New York's celebs go to see and be seen while dining on haute versions of comfort food classics.

You recently had a group of second graders from P.S. 41 come to your restaurant. How did that come about? I have volunteered for The Days of Taste for the last four or five years. And through that, I did a similar program at P.S. 3, so I guess a lot of the kids told their parents, “hey, the chef at The Waverly came to my school,” and they asked me if they could come in and do a field trip because the're studying restaurant management and restaurant studies – in second grade, it’s so cute! So I said, “of course.” I love teaching kids. We brought them in and they asked all these questions.

Can you give some examples? “My mom wants to know how you get a reservation at the Waverly Inn.” That was one. Then from there to, ”do you serve aged proscuitto di parma?” They’re very sophisticated, foodwise. Then we talked about the jobs at the restaurant, what the waiter does, what the busboy does, what the cook does. We took a tour through the kitchen and I showed them all the stations. We had this gigantic striped bass that had just come in, and they went berserk over it. I loved doing it. It’s just so honest, so great. And they’re a captive audience.

When you were their age did you know you wanted to be a chef? No, I had no idea, and I certainly didn’t know what aged prosciutto was at that age, but I was very into food. My mother packed us some very exotic lunches compared to the other kids. There was broccoli rabe in my lunchbox and kids would make fun of me, saying that I was eating weeds. There was always a connection between food and the family. You’d eat at funerals, you’d eat at weddings, but that was the only sort of connection I had as far as becoming a chef.

What was your first entrée into the restaurant world? I was in my 20’s, going nowhere in a miserable career recruiting insurance executives, and I was cooking. I was experimenting with all these foods that I had eaten growing up, and I started reading the New York Times on Wednesdays. I got into it as a hobby, and then after a lot of self-examination and unhappiness in my career, I decided that I needed a change. I didn’t know what to do; cooking was probably the third thing that occurred to me. I looked at FCI, CIA, and they were both thousands of dollars. Finally I found this little class at the New School, I enrolled, and I found that I had some propensity towards cooking. The teacher recognized it right away and I was off and running.

So where did you land first?
The first professional cooking job I had was at Dean & DeLuca, prepared foods. Then the teacher called me and said hey, my husband has this job for you. I got a job on this busy little salad station. It was trial by fire – just insane. I had no idea what I was in for.

What did you take away from that? I learned that I must be crazy to want to do this, but it was a terrific experience and I went on to Arizona 206. It got 3 stars in the New York Times, and then I got very serious about the kind of cooking that I wanted to do. Everything was highly stylized in those days – 1993 – the chef was David Walzog, his presentations were amazing. I learned a lot in a very short span of time. I was working all the stations, and ended up on the grill, which was very intense. It was a busy little restaurant with an extremely high standard.

At what point did you decide that you needed to do your own thing and take charge? Years had passed and I became a sous chef at Nick and Toni’s in East Hampton. Bobby Flay got me that gig. It was seasonal and I had some things going on in my life that made it a good idea to get out of New York for a while. And that was a very different kind of experience. That food was very simple. You couldn’t hide the food in sauces or long reductions. These were amazing ingredients, grown in the back of the restaurant, put on a plate, drizzled with olive oil or fresh lemon and that was it. It was the kind of food that, looking back, led me to develop a style. You take the food, add very little to it, plate it beautifully, cook it right. I always had good technique; I learned technique at Arizona 206 and I always prided myself on cooking things, fish especially, correctly.

So time progresses, and now you have your own place. Yes, I’m a partner and chef at the Waverly Inn, and that has a whole new set of challenges. I have a managing partner, Emil Varda, whom I work with closely, and we split the responsibility of running the place, but now, when there’s garbage that’s not picked up or when there’s an inspection, or the hoods need to be cleaned . . . there’s just so many moving parts now.

Do you have any management background? I do. I went to business school and as I said, I was a recruiter, which actually helped me
learn to communicate effectively early on which has helped me immensely as a chef.

You’re not one of those chefs who yell and throw things in the kitchen? I have my moments, I think, but I don’t find that it really helps. When the screw-up happens, it’s already too late to react to it, and it exacerbates the whole thing, so I just try to remain calm, and wring necks after the service is over. In the moment, no, I don’t lose it, I just roll with it.

The menu for the Waverly Inn is very traditional. How did you make those choices? Before we renovated the Waverly, my partners Graydon Carter, Sean MacPherson and Eric Goode, talented visionary guys who are very involved in the restaurant, and I thought about what the food might be and we always knew it would be sort of traditional American fare. Then we found this menu stuffed into the floorboards while we were cleaning up, unraveled it, dusted it off and we saw this menu, probably from 20 years ago. On the menu was chicken pot pie, oysters, steaks, so that was it. The rest was easy – we just reinterpreted it and made it as good as it can be.

Any changes to the menu anytime soon? Well we change it seasonally, so there will be good spring products like fava beans and asparagus. We try not to use anything that comes from too far away. We use the markets, Satur Farms out on Long Island, farms from Upstate New York, keeping it local as much as we can.

Does it bother you that a lot of the press you get is about being seen at the Waverly Inn rather than about the food? As a chef it bothers me. As a business partner I love it. Would I prefer that people talk about the biscuits, the chicken, and the chicken pot pie? As a chef, yes, but having a stake in the business? Say whatever you want, just keep coming back.

Where do you like to eat? Embarrassingly, I work a lot and don’t get out very much. You can often find me at Emilio’s on Houston Street for just amazing pasta and lamb chops and food cooked, in my mind, in the old way. Sometimes I’ll sneak off to Joe’s Pizza and get a slice or two there, the mozzarella slice. I love dim sum on Sunday at Dim Sum Go Go. It’s nontraditional, but it’s fast, good, young, and vibrant. I recently had the meal of my life at Daniel. Absolutely phenomenal. The kind of meal that makes you either want to pursue cooking with a vengeance or quit.

You’re currently working on a book? Yes, I’m writing a kind of memoir. If I can write a memoir, this must be a great country.

Why would I want to read it? Most people wouldn’t. We’re only printing seven copies: six for my mother and one for my girlfriend. No, I think that there’s a lot of interest in the lives of chefs and what they do. So my friend Ken Carlton, a novelist and close friend for 20 years, and I came up with the idea to write my story. So we wrote this proposal, shopped it around, got a great agent, Endeavor, who took it to just the best editor in New York, Dan Halpern. Hopefully people will read it and identify with my situation – I was in something I hated and I found a really great outlet for myself that I could thrive and be happy in. I think that’s why you’d want to read it. It’s coming out in early 2009, if I can get it done.

How have you found being an author? Being an author is far more of a pain in the ass than I could have ever imagined. It requires many hours, it requires remembering many things I would have rather left forgotten and having to articulate them on paper, which is not altogether pleasant. It’s very cathartic. If it sells five copies, it won’t matter to me. It will have been an amazing experience.

Anything else in the future for you? TV show? Cookware? I don’t know. Bring it on! No one’s calling – we don’t have a phone, there’s no way to reach me! But I’d like to do it all. We’ll see where that all takes me.

#chef
#interview
#john delucie
#restaurants
#waverly inn
Do you know the scoop? Send us a Tip