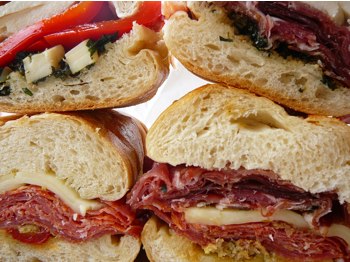 All the sandwiches at Carluccio’s are named after famous Italians, or Italian-Americans. The epic menu starts with the Frank Sinatra (salami and fresh mozzarella), and ends with Joe Pepitone (smoked mozzarella and dressed veggies). Joey Fatone, who was born in Bensonhurst, seems to have gotten a namesake sandwich that probably wouldn’t be out of place in a fantasy lunchbox league competition, if such things existed- most sandwiches at Carluccio’s include fancier cured meats like breasola and capicola. The Rudolph Valentino (#73) even includes spicy sopressata and hot stuffed peppers.

There’s a bit of vintage radio, sanity-testing charm to the place, as the descriptions of the more than 150 sandwiches are posted in odd locations around the shop, mixed in with all kinds of cultural artifacts. Sandwich # 139 on the list, the Doo Wopper Hero, boasts just seven ingredients and costs $12; its annotated description, however, is accompanied by a mini-billboard of no less than 35 singers and groups who performed doo wop hits in the 50’s and 60’s, complete with borough of origin (e.g. “Joe Villa and the Royal Teens, Brooklyn 1958, ‘Short Shorts’”). Rat Pack, Coney Island, and Eisenhower-era sports memorabilia is affixed to every possible surface in Carluccio’s, including the ceiling. Newspaper clippings, jokes printed off the internet, and hand-lettered aphorisms about things like the dangers of letting your kids pick your nursing home take up the rest of the space. A small sign hanging over the counter explains that recent milk price hikes have also caused the cost of Parmigiana heroes to increase a few dollars.

This Daily News article mentions that owner “Ronnie Carluccio has been on "Emeril Live" four times, where the half-mad chef tried to extract his hero secrets.” It doesn’t seem like Carluccio’s is home to many true secrets, just decent ingredients and a consistent approach. The bread is fresh; the prosciutto is salty and crisp. The sandwich menu doesn’t refer to its house pesto as pesto- they call it “Carluccio’s Basil Mix”- basil puree with oil, salt, whole pine nuts, and tiny cubes of what could be asiago cheese, all mixed coarsely. Other than that, the homemade “Lioni” brand mozzarella is the star of many sandwiches here. Carluccio’s menu reminds you that Zagat “calls Lioni the creamiest in town.” This might be true.

The Carluccio family operation is part of partnership with next door’s Lioni Prime Meats, and Lioni Fresh Mozzarella down the street. Pennant-style plastic flags and banners hang from the storefronts to nearby lampposts, advertising “farm fresh chicken cutlets” and veal chops; sometimes there’s an olive cart parked outside the single, heavy wood table outside the store, where briny green cerignolas are dispensed the pound. Free sandwich samples are also usually available on a tray by the register.