America's hero Joey Chestnut SEVENpeated as Nathan's Hot Dog Eating Champion today in Coney Island. Chestnut, who was carried into the arena on a Nathan's-emblazoned throne, broke his own world record by eating demolishing 69 hot dogs and buns during the 10 minute competition. Or as the ESPN announcer put it after the final dog, "with that swallow, history was made." 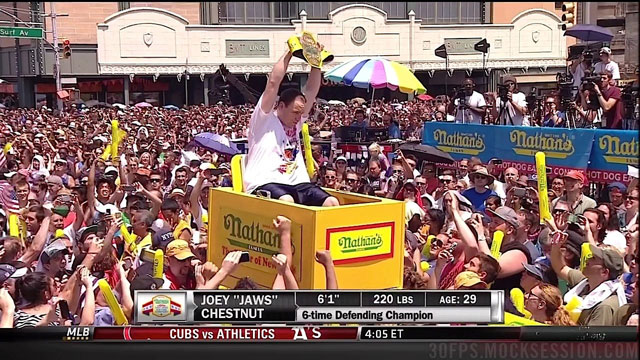 Chestnut, 29, ate one more hot dog than he did last year to break his own record, and unseat Kobayashi as the all-time winningest Nathan's hot dog eater. Chestnut told the News that he does not intend to retire: “Seven is not the end. Ten is looking more and more likely.” Sonya Thomas, known as “The Black Widow,” won the women’s contest, eating 36 and three-quarters hot dogs and buns to Juliet Lee’s 36 hot dogs.

#black widow
#joey chestnut
#Nathan's Hot Dog Eating Contest
#sonya thomas
Do you know the scoop? Comment below or Send us a Tip