Our latest installment of Quick Bites brings us to the West Village for ramyun, Korea's equivalent of Japanese ramen.

THE VIBE
Jeju Noodle opened on a prominent far-West Village corner last week, and it's one of the most ambitious, and unique, ramen spots to hit town in a while. The chef here is Douglas Kim, who learned a few things in the kitchens of Per Se, Chef's Table at Brooklyn Fare, and Morimoto. Of course, glittering resumes don't always guarantee stellar food on your table, but in this case Kim's experience does speak to the attention paid to eat each dish, in concept, execution, and plating. And Kim's focus on Ramyun, the Korean take on the Japanese dish, makes Jeju stand out even more.

Jeju takes over from Nighthawks in that rounded building on Christopher and Hudson (somewhat confusingly, the former restaurant's signage/red awning is still in place), and they do a decent job of making the awkward space feel comfortable. Try to sit at one of the tables, however, as opposed to the bar, with its slightly-too-short, backless stools. Another Nighthawks holdover, the scuffed-up tiled floor, seems out of place with the otherwise minimalist decor.

Jeju is brand new, and is apparently working out some staffing issues; a section of the restaurant was closed off on Saturday night because the kitchen was struggling to keep up with demand. The front of house team also seemed a bit addled, though both of my meals were pleasant enough overall. One odd but not unwelcome detail: the bathroom has a separate soundtrack from the dining area, and consists entirely of loud Korean drumming, perhaps as a kind of white noise as a courtesy to the tables right near the door? 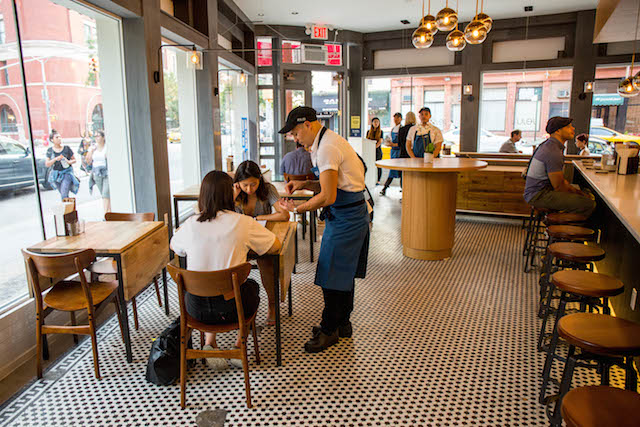 THE BITES
Jeju has three varieties of Ramyun on the menu, and the two that I ate were excellent. The Fish Coop ramyum ($16), in fact, was one of the best dishes I've had all year, its sparkling clean, remarkably rich broth a bonito-chicken combination that plays host to chewy noodles, soft chunks of confit chicken, seared pork belly, a punch of dashi, pickled cucumbers, herbs, jalapeno... it's a hearty, heady bowl of soup that I can't wait to dive into again.

Equally worth a return visit or three is Kim's Gochu Ramyun ($16), the thick and creamy pork broth reminiscent of tonkotsu but with a sweat-inducing fire thanks to the "sauce 'Ko'mericaine" and white kimchi. There's a sweet undertone here as well, and plenty of perfectly-cooked noodles, fat slabs of pig, and earthy kikurage mushrooms.

The three appetizers I ate weren't nearly as accomplished. The Jeju Chicken Wings ($12) were meager and ho-hum—even the house dipping sauce couldn't liven up this party—though the accompanying pickles and vegetable bits looked pretty. The Cucumber Kimchi ($7), served sticky with a spicy plum dressing and adorned with shiso leaves, was too refrigerator-cold to have much impact. Better is the Soon Du Bu ($11), a small crock of soft tofu and mostly-tender steamed mussels floating in a sun-dried tomato broth, but ordering this is also like having a small bowl of soup before eating a large bowl of soup—the ramyun—as your main course.

THE VERDICT
Go to Jeju Noodle Bar soon for the ramyun, before it gets too crowded with autumn noodle slurpers. This is great stuff, and, as far as I know, unlike any other bowls of ramen in town. If chef Kim can perk up the rest of his menu to match his mains, Jeju has the potential to be one of the season's big winners.