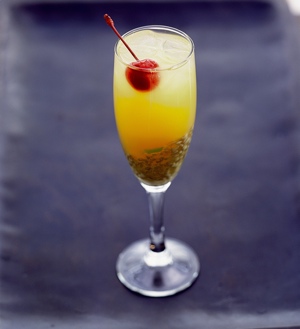 In his cookbook called Mantra, which was released last month, Graffiti chef-owner Jehangir Mehta includes a recipe for a cocktail he calls “Barley Legal,” a cheeky mix of ultra-healthy barley water and Johnny Walker. "This drink is dedicated to all the young celebrities out there," the chef writes, introducing the recipe. And it’s probably a sincere note of acknowledgment, coming at the tail end of book filled with new and understated ideas about food. The recipes depict Mehta sneaking sweet Kahlúa into bitter chicory soufflé, loading Financiers with fenugreek, and reimagining Yorkshire pudding laced with duck fat and turmeric. In line with Mehta’s resume, most of the botanical-crazy recipes in Mantra are pastry chef centric, and many are vegetarian. The book carries a blurb from Mehmet Oz.

On paper, this Barley Legal thing seems like a cocktail gone awry: ginger and Scotch, orange and barley. It turns out to be a well-balanced drink, and probably even somewhat healthy—“Barley water has been sold at Wimbledon for more than seventy years,” the book’s sidebar says, relating the larger history of the food. Like an unexpectedly genius performance from a supporting actor in a movie, barley water emerges nonchalantly here as a major player. The liquid leftover from soaking the grain tastes a lot like expensive-as-hell coconut water. Coming in at a fraction of its cost, the barley water in this drink is a good way to clear out your pantry, and maybe your system. Check out the recipe after the jump.

1) Soak the barley in 1 cup of water for 5 hours. Strain and chill the liquid. Reserve barley.
2) Muddle together the ginger, sugar, and orange juice in a cocktail shaker. Add a scoop of ice cubes, the barley water, and the Scotch. Shake together well.
3) Spoon 1 T of the barley into each of two Champagne flutes and add some ice cubes. Strain the liquid into the flutes, filling almost to the top, and garnish each glass with a cherry.