Our latest installment of Quick Bites brings us to Chinatown for the Xi'an Famous team's latest offering.

THE VIBE
Do you like Xi'an Famous Foods? Of course you do. That place is fucking great.

I never made it to the original location in Flushing, but ever since current proprietor Jason Wang and patriarch David Shi opened their first Manhattan outpost in 2009—a tiny, steamy spot under the Manhattan Bridge—and subsequently expanded all over town, it's been a go-to favorite of mine. The Liang Pi Cold Skin Noodles, the Cumin Lamb Burger, the Spicy and Tingly Beef Hand-Ripped Noodles, the Spicy and Sour Spinach Dumplings: I could eat these dishes several times a week for the rest of my life.

So when Wang announced that he was transforming his Bayard Street restaurant into something called The Dumpling Spot (the Xi'an Famous outpost that was here can now be found in a much larger location a few storefronts away), this was obviously pretty exciting news. 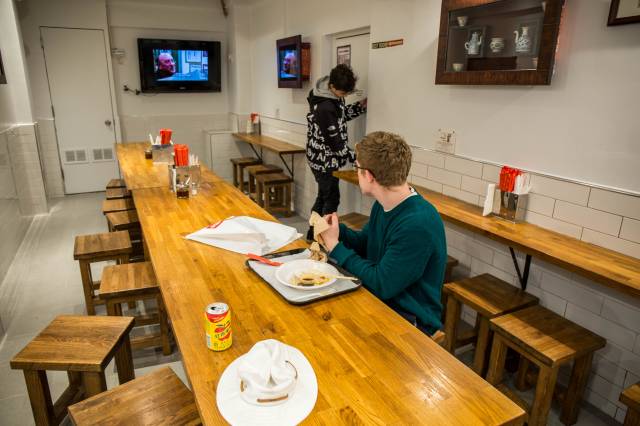 The interior has the same encased, presumably-Shaanxi-province artifacts on the walls, the same cramped bathroom in the hallway of the tenement next door, the same wooden communal table, with a few stools and an eating counter by the front window.

But unlike the previous spot, and every other Wang joint I've ever visited, there's no energy here. No sense of fun. Without an open kitchen (your meal is delivered from the depths via dumbwaiter), a solitary, palpably-bored counter worker is your only connection to the food. There's a TV hanging on the back wall, looping cable-news puff pieces on Wang with the volume turned up. This is irritating, especially since it competes with Wang's signature hip-hop mix (now featuring only the "clean" versions of songs) playing at the same time.

The whole atmosphere is closer to dreary waiting room than hip Chinatown hole-in-the-wall.

THE BITES
But who cares about atmosphere when you're wolfing down good cheap dumplings, right? Unfortunately, Wang's dumplings at The Dumpling Spot suffer from the same sorry lack of heat and excitement as the overall vibe of the place.

Take the Pork and Cabbage Fried Pot-stickers for example, which were sold in servings of ten one night, then as a six-pack the next. These look great, with all of the requisite chewy-crisp char on the outside, but they're basically flavorless aside from a faint sugary sweetness. Even the dipping sauce, which I ordered "spicy" each time, was sweet. The "chili oil" at the tables was sweet too. Not sure what's going on here, but it's not good.

A little better—and a little less sweet—were the Three Treasures steamed dumplings, which were impressively plumped-up with pork, shrimp, and chives inside a firm, doughy shell. The steamed Veggie Delight Dumplings were also okay, with the bok choy giving things a little bite. But since the best dishes at Xi'an Famous are so intense, so explosively flavored (and yet also well-balanced!), it's disarming to bite into something so bland at The Dumpling Spot.

In addition to the four types of dumplings currently offered, you can also choose from among a selection of meats and sides. The General's Chicken Drumstick is fantastically juicy, with a crisp, well-seasoned skin, heavy on the cumin. It doesn't really pair up with anything else you might eat here, but it does taste good. The same is true with the Sliced Xi'an Stewed Beef, which looks like a terrine, or a headcheese, and is served cold. Your Instagramming friends will not appreciate the dish's appearance, but there's a welcome gaminess to be had for the more adventurous, even if, again, it doesn't really make sense as part of a larger meal.

The Snow White Sticky Rice didn't look much like the photo on the menu—instead of an ample pile of various toppings, the actual dish comes with a single, small, plum-like fruit. It didn't have nearly enough presence to stand on its own.

THE VERDICT
Maybe Wang and company will put some fire into the Dumpling Spot at some point, but right now it makes zero sense to eat here instead of the spacious new Xi'an Famous located three or four door down. Or any number of other dumpling joints within a three block radius.