A break from Punjabi's construction-induced nightmare is finally in sight. The East Village delight known for cabbie-friendly bathrooms and cheap, vegetarian meals has suffered a precipitous loss of business for years now due to a long-running road work outside its doors. Last night, deli owner Kulwinder Singh, his son Jashon Singh, and a packed room of supporters pleaded with Community Board 3's Transportation and Public Safety Committee to install taxi relief stands outside the struggling business.

Taxi relief stands are short-term parking spaces reserved for drivers who need a break to go to the bathroom or grab quick a bite. Committee members readily approved four temporary stands that will be available for daytime use around the corner from Punjabi on Avenue A until the reconstruction project is done. (The work is related to a major reconfiguration of Houston Street and, according to the Lower Manhattan Construction project, involves "reconstructing/replacing combined sewers, truck mains, water mains, catch basins, fire hydrants, sidewalks, trees, as well as two ‘Green Street’ park areas.")

Punjabi Deli has suffered from a significant drop in business since construction began on East Houston and East 1st Street way back in 2010. The city originally planned to extend the sidewalk and a "green street" park, but five years later the block is still plagued by street closures. The committee was optimistic that construction would end by August.

Punjabi Deli has been popular with taxi drivers since the deli opened twenty years ago. A long line of cabs used to sit on East 1st Street in front of the shop until construction wiped out their parking spots. Drivers now park anywhere they can, often illegally and risking fines. Jashon told us, "80 percent of our clientele historically has been from cabbies and that has been eliminated because cabbies haven't been able to park. I'll say between 50 and 80 percent of our business has decreased." 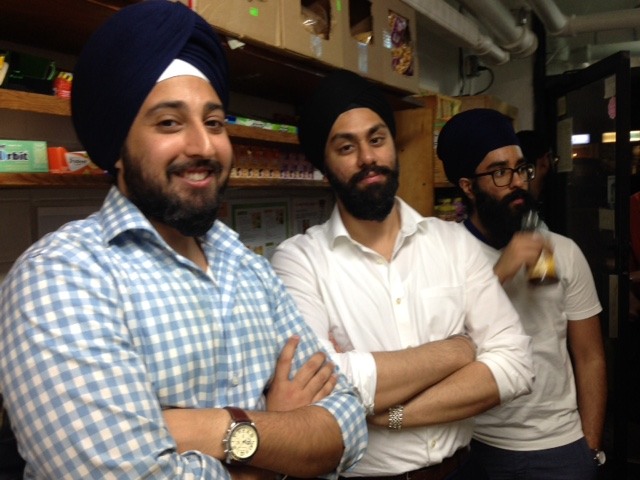 The Singh family understands the many difficulties taxi drivers face. Kulwinder drove a yellow cab for five years before opening Punjabi. After the meeting Jashon said:

"They have to sometimes keep Snapple bottles in the car, it's that bad. And some of these cabbies are on the road for 14 hours and they have to deal with the stresses of drunk people at night, people yelling at them to go faster or drive a certain way. So for 14 hours they're super stressed out on the road and obviously they can't just stop anywhere. It's New York City, so having a rest stop, having a permanent taxi relief stand will go a long way not only for us but for the thousands of cabbies that make the city what it is."

"It's very hard for them, very hard." Kulwinder added.

Community support for Punjabi has been overwhelming. "If it wasn't for Punjabi, I would have starved to death years ago!" exclaimed Allegra Riggio, who attended the meeting and has lived in the neighborhood since 1996. She then waved over her husband, Jared Harris—also known as Lane Pryce on Mad Men. Harris advocated for the protection of mom and pop shops saying, "This area is attractive to people, to real estate developers, because this area has character. If you rip down the buildings and rip out all the character, you just end up with Toronto, which is a fantastic city, but everything looks the same there."

Despite the approval of a temporary taxi relief stand, Punjabi Deli still has a ways to go before they can find a permanent spot for the city's tired cabbies. Past road blockage and noise complaints dissuaded the committee from approving 24 hour parking, although as Punjabi Deli's lawyer Ali Najmi aptly put it, the noise can't be "any worse than what's going on right now."

DOT spokesperson Bonny Tsang tells us the temporary relief stand will be up soon and that the DOT will consider moving it to a permanent location outside Punjabi once construction is complete. The Department of Design and Construction, the city agency in charge of the construction, did not attend last night's meeting, We reached out to DDC spokesperson Howard Pollack who said that the roadwork in front of the deli will be finished this summer, and that they have been working with Punjabi Deli and other businesses to minimize impact.

#community board 3
#punjabi deli
#save punjabi deli
#taxi relief stand
#original
Do you know the scoop? Comment below or Send us a Tip