It's The Weekend For Block Parties & Potluck Picnics

There's a Pie Bake Off & Backyard Potluck going down this Saturday courtesy of the folks at Brooklyn Brainery. The bake-off brings home cooks together for the "most casual bake off" ever, according to organizers, so prepare your tummy for lots of pie samples and general acknowledgement of the awesomeness of the baked good. Entry into the pie-off is currently full but there's still plenty of room for the second portion of the day, a potluck of all kinds of sides and toppings and other treats to accompany burgers and hot dogs provided by the Brainery. The afternoon picnic runs from 3 p.m. to 7 p.m. and tickets are just $5.

Stroll Smith Street from Bergen to Union in Brooklyn free from fear of cars at the annual Funday Sunday, unfolding from noon to 6 p.m. Eight blocks will be closed to traffic and packed with all sorts of vendors from food to clothing to jewelry and artwork; organizers, the South Brooklyn Local Development Corporation, promise "no tube socks, no sheet sets" that clutter other street fairs. Smith Street boasts over 70 different locales for eating and drinking, if things out on the street don't appeal to you. 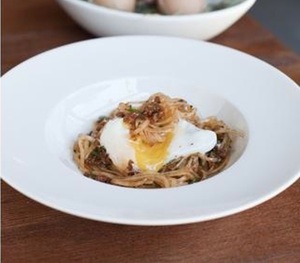 Food crawls have a reputation as touristy time wasters but when Bon Appetit is doing the curating, you're getting the good stuff from the folks who know it well. The magazine is hosting two Grub Crawls in NYC this month; the first, an afternoon tour of Greenpoint and the second an evening jaunt on the LES. Tickets are a pricey $150 but both tours make five stops in their respective nabes, with visits to both notable bars and restaurants for peak hedonism on a summer Saturday.

The Sud de France Festival has been quietly throwing events at some notable restaurants around the city including Contra and Reynard; now, they're taking their celebration to the streets at the "La Guinguette due Languedoc-Roussillon", a free block party inspired by fromguinguettes, cabarets full of feasting and eating and dancing.

On Sunday from noon until 5 p.m., they'll take over 74th Street between 5th and Madison, installing a giant table that runs down the center of the block. On it, enjoy things like brandade de morue (a salt cod dish made with olive oil), ice cream from Van Leeuwen, as well as chocolates and Fleur de Sel samplings. There will also be live music if you choose to enjoy on-site; otherwise, treats are available to take home.