It's National Dumpling Day: Here's Where To Get Your Fill In NYC

Every dumpling has its day and today is the day for ALL dumplings—especially those that are unique and specially priced because Big PR dictated it. Below, a few deals on dumplings, which is never a bad thing, plus a few bonus newcomers in the NYC dumpling scene. 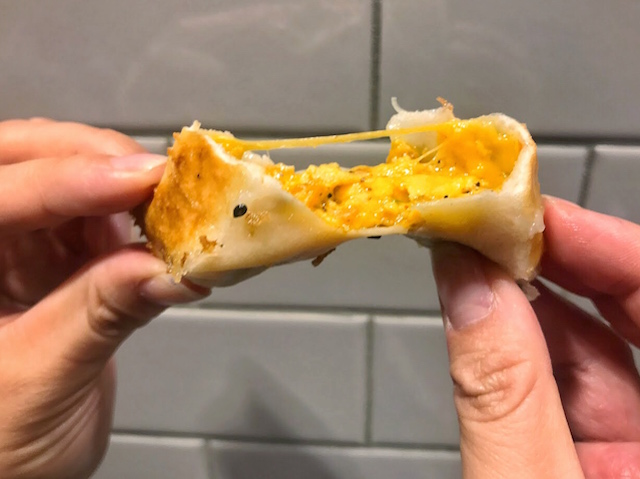 In SoHo, Pinch Chinese, the pedigreed soup dumpling spot, debuts a new BEC Dumpling that stuffs dumpling skins with traditional American breakfast items. The dumplings ($12 for six) come filled with Niman Ranch bacon, New York cheddar, scrambled eggs and scallions with a side of sriracha instead of ketchup. Snag them all day today and during lunch and brunch going forward. 177 Prince Street, 212-328-7880; pinchchinese.com

Momo Delight (née Momo Bros) isn't doing a deal per say, but as the winner of this year's Rookie of the Year Vendy we advocate for paying his cart a visit on this national day of recognition. Pasang Thinlay makes jhol momos, dumplings in a sauce made from sesame, garlic, tomato and onion. Find the Momo Delight truck at 73rd Street and Broadway in Queens; momodelight.com 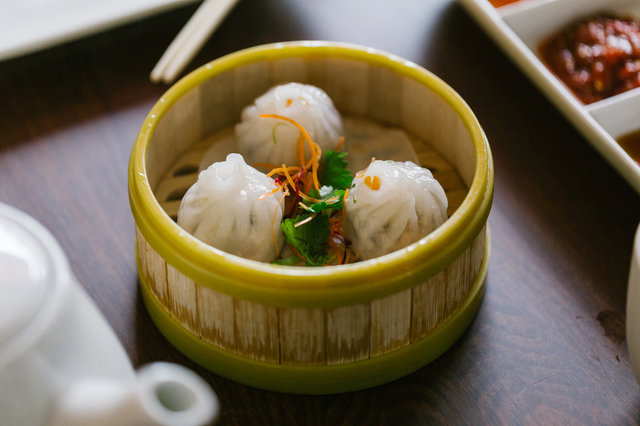 Dim sum mainstay Jing Fong recently opened an UWS offshoot serving the restaurant's exemplary dumplings and other dishes. It doesn't have the rattling carts as its downtown sibling, but the new location boasts many of the same dumplings, like the veggie versions pictured above, plus Siu Mai Shrimp & Pork Dumplings and Har Gow Shrimp Dumplings. The restaurant also boasts outdoor seating and the weather happens to be spectacular. 380 Amsterdam Avenue, 646-678-5511; jingfongny.com

Clubby sushi spot Megu in Chelsea offers a vegetarian version of dumplings that channels a bit of the Mediterranean. Their Spicy Cheese Dumplings—which look like skewered ravioli—are stuffed with feta and mozzarella cheeses, amped up with some charred scallion. They're typically $14 for an order, but for National Dumpling Day, you can score them for just $10 all day and night. 355 West 16th Street, 212-885-9400; meguworldwide.com

There are now two different locations to sample Chris Cheung's superlative dumplings, including the Windsor Terrace original and a darling new dumpling counter in SoHo. Opt for the classic Juicy Pork Dumplings or the Dry Aged Beef Potstickers, made with 28-day dry aged beef in a homemade dumpling wrapper. Vegetarians are looked after with Shanghai Vegetable Dumplings. 471 16th Street, Windsor Terrace, 929-295-0188 and 483 Broadway in SoHo; eastwindsnackshop.com 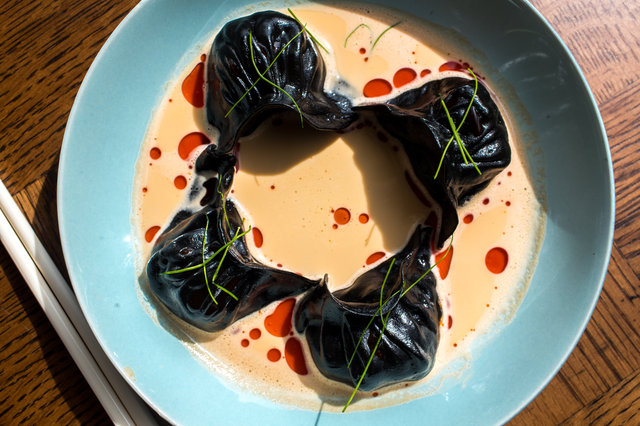 Dale Talde's had a busy year so far but we're most excited about the interesting creations he's got going on at Rice & Gold, his new pan-Asian eatery inside the Hotel 50 Bowery in Chinatown. Most notable: these inky black offerings, which are filled with a scallop and lobster mixture and served in sauce Americaine (onions, tomatoes, white wine, brandy, salt, cayenne pepper, butter and fish stock). Grab the Har Gow for $18 or another one of the tasty dim sum options. 50 Bowery; no website

For a sweet take on the genre head to Merakia, the newly opened Greek steakhouse in the Flatiron for their Loukoumades, honeyed dumplings that are deep fried. The puffs are tossed in honey and walnuts and will be served today as a dessert for $10. 5 West 21st Street, 212-380-1950; merakia.com

#dumpling
#dumpling day
#dumplings
#original
Do you know the scoop? Comment below or Send us a Tip
A new Gothamist is coming! We’ve moved comments over to our beta site. Click here to join the conversation and get a preview of our new website.