It's Easy to Get Past UN Security: Dress Like KFC's Col. Sanders

Last week we got sent a press release about a KFC publicity stunt at the UN, and shrugged it off because we're not corporate tools who reblog each and every publicity stunt (unless it involves American Apparel). But what makes this one interesting is that the stunt has deeply embarrassed UN security, who allowed a guy dressed like Colonel Sanders into restricted areas of the UN without security clearance. The guy even got a photo op with current president of the United Nations General Assembly, Libya’s Dr. Ali A. Treki!

A publicist for KFC tells us "the Colonel and a photographer were able to talk their way into the UN building to talk to officials about the request that Grilled Nation 'earn a seat' as the 193rd UN member state." Acceptance by the international community is long overdue! How long can the UN keep sitting on its hands? 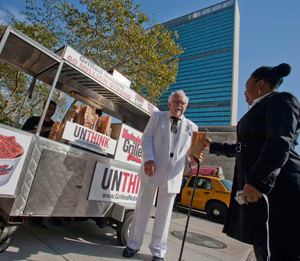 Security is "still trying to find out exactly what happened," says Michele Montas, spokeswoman for UN Secretary General Ban Ki-moon. "It should not have happened—that I will stress, and very strongly. There was some lapse in security and the individual in question... was, on the initiative of one security guard, taken... into the UN." Perhaps a little free chicken greased the right palm?

But despite the photo-op, Treki's spokesman insists, "There was no meeting. No appointment scheduled with the actor impersonating Colonel Sanders . . . there was a brief encounter with the president of the General Assembly." And Treki only shook the Colonel's hand because "he's a very polite man." (Which could apply to Treki or Colonel sanders.)

Perhaps the best part of this fiasco is that the spokeswoman for the United Nations Secretary General has been reduced to acknowledging the Grilled Nation's letter demanding UN membership, telling the National Post of Canada, "That letter is absolutely void to us; it has no meaning whatsoever. The UN cannot be involved in a commercial venture. Period. This is being touched upon by our legal department." Good to see they're keeping busy over there!

#colonel sanders
#kentucky fried chicken
#kfc
#publicity stun
#united nations
Do you know the scoop? Comment below or Send us a Tip