If the name Marco Canora isn't immediately familiar to you, perhaps you know him better by the "bone broth" sensation that sparked a nationwide movement into sippable animal juice. Though Canora's legacy will no doubt be intrinsically linked to his rebranding of stock, the chef's restaurants—including the brodo incubator Hearth—have been destination spots all their own, which will no doubt apply to his latest venture, Zadie's Oyster Room.

Zadie's is actually a rebrand and refocus of Canora's Fifty Paces wine bar, which was itself a retooling of Canora's Terroir on East 12th. In his third time's the charm effort, Canora's kicking it old school with one of NYC's most historic critters: the oyster. 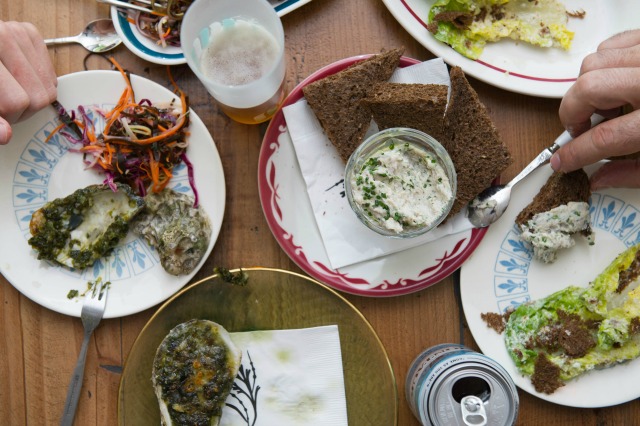 The small food menu—which is dwarfed by a much larger wine and beer list—offers the bivalves in myriad states, from the rote raw form popular with happy hour goers to more eclectic preparations like pickled and poached. A baked version ($9.75) is fortified with ham, egg, leeks and seaweed butter with the fried option ($9.75) is flavored with fennel, dulse, garlic and lemon.

A small list of "Other Bites" includes other sea faring dishes like Brown Bread with anchovy butter ($3.50), Baked Top Neck Cams with red pepper and chili ($9) and a Kelp Cole slaw ($7).