Is Chicken The New Steak?

It's just before 7 p.m. on a Wednesday night and Le Coq Rico, a new restaurant by 3 Michelin-star Chef Antoine Westermann on East 20th Street, hums with the chatter of diners who've nearly filled the dining room and adjoining bars just months after opening. Waiters navigate narrow paths to deliver plates of rich foie gras terrines, platters of offal stacked with chicken livers and hearts, and crocks of bubbling macaroni au gratin to well-heeled diners. Those sitting along the well-lit bar overlooking the open kitchen, however, have a front row seat to the restaurant's main attractions: spit-roasted poultry lazily spinning and dripping in front of the flames.

The city's—and world's—obsession with chicken is well-documented, and on the surface, there's nothing particularly revolutionary about rotisserie chicken. But there's a trend in poultry that's taking the humble bird and exalting it to cult status. Suddenly, menus are filled with hot chicken buzzwords like Sasso and Heritage Breed, touted for their ancestry and the aging the poultry undergoes before making it to our plates. A whole bird can go for triple digits, while a dry-aged porterhouse for two can run just a bit more.

Is chicken becoming the new steak?

Look at any restaurant menu and the most expensive entree is bound to be beef, often gussied up with a Wagyu or grass-fed notation, or a statement about how—and how long—the cut was aged. The same types of designations have now become a trend in poultry dishes, too, like the 130 day aging process for a Catskill Guinea Fowl at Le Coq Rico, or the "vegetable-fed, antibiotic-free" chicken from Crystal Valley Farm in Indiana, "family owned since 1940" shouts the menu at Beasts & Bottles, which just opened in Brooklyn Heights.

At Mauer's Mountain Farms, a fourth-generation farm raising guinea fowl in the Catskills, the birds are raised for 130 days before they're ready for the dinner plate, around three times as long as conventional poultry raised on industrial farms. Mauer's is one of a few who are changing the pace of chicken growing in the United States, where genetic modifying and selective breeding have created chickens that plump up to twice the size of their ancestors half a century ago—and in half the time.

"The cost of meat from slow-growing birds, which are often raised outdoors, can range from 20% to three times more than the price of conventional chicken," an investigation by the Wall Street Journal discovered.

Additionally, "companies such as Nestlé SA and Compass Group PLC-owned Bon Appétit Management Co. are pushing suppliers to eschew recent genetic progress, countering that decades of selective breeding have led to painful ailments and muscle conditions, and have stripped the meat of flavor."

This harkening back to more traditional farming has become a rallying cry for the locavore, farm-to-table movement. It's also an opportunity for restaurants to sell poultry touted as such at premium prices back to the consumer. Cattle raised on grassy slopes can command exorbitant prices to diners looking for a seemingly superior product, and now these chickens do, too. 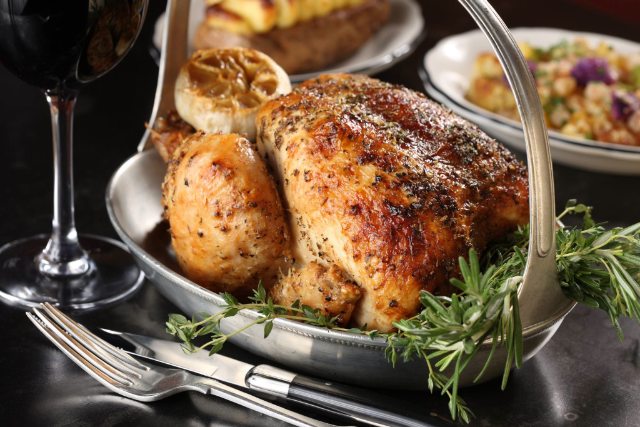 "There has to be an understanding of the economics—almost a new sense of the economy, says Jennifer Grossman, founder and president of FarmCo, which "creates economically and environmentally sustainable business ventures to regionalize our food system and preserve the viability of family farms."

"Yes, there's a bottom line: pay bills, pay staff, pay insurance, pay for fees, pay for distribution. But there's a benefit associated with how you farm, not just what you farm."

Grossman works with Mauer's, which supplies Guinea Fowl to both Le Coq Rico and Rotisserie Georgette, another restaurant charging $39 per person (for the whole bird), or just shy of $80 for two people. She sells her birds anywhere from $5.50 per pound at cost to $6.95 a pound, depending on the volume requested by the buyer (Grossman's products are not available at a retail level).

The birds Mauer's sells to Le Coq Rico clock in around four pounds, so the restaurant pays a minimum of $25 per animal plus transportation and labor to the restaurant, making the $96 Catskill Guinea Fowl about a 284% markup.

By comparison, Amali, a sustainable Mediterranean restaurant on the UES, charges $96 for its 32 ounce, grass-fed Cote de Bouef (a thick, bone-in ribeye), an average 300% markup when purchased for around $12 per pound.

"I understand that not everyone can pay for a $25 bird," Grossman admits. "But changing the food, the way we think about food and the way we respect our land...it has to start in a way so people understand why there's value there. It goes beyond the dollar." 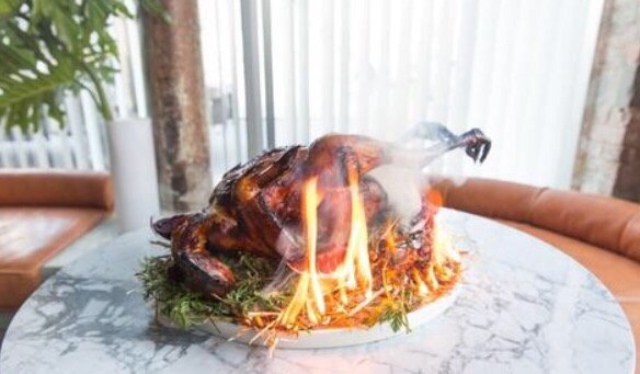 "I'm not surprised to see these really significant prices changes, where you think of chicken as this inexpensive protein but that's only because of the industrial chicken model," says Alex Dimin of Happy Valley Meat Company.

Happy Valley Meat Company buys whole grass-fed cows from individual farms at prices between $2.40 to $3.50/pound and then works with a processor to sell individual cuts to restaurants like Amali, Roberta's and Momofuku Ko.

"Once you see these restaurants working with these small farmers raising chickens you are going to see it being more on par with beef or high end pork or something like that," Dimin said. "That makes a lot of sense to me."

Name brand breeds of chicken like Sasso—think of it a bit like a Wagyu or Kobe, in beef parlance—are also a popular choice at restaurants like Le Turtle, who charge $58 for a whole bird. But an article bye Grub Street warns that "Sasso doesn’t really mean anything if the bird is factory raised on a formulaic diet," meaning a less scrupulous farm can still tout a conventionally-raised Sasso as something special. Similarly, restaurants may find themselves tempted to add a breed or farm flourish to their menus even if the animal does not meet that criteria, like the scandal surrounding kobe beef illustrated just last month.

It's not just the cost of a well-bred chicken that's passed on to the customer, of course; restaurants have more involvement with our food than a grocery store or market.

"There are industry accepted standards of what pricing should be like and everyone basically tries to create a menu mix that gets them to a certain number," explains James Mallios, managing partner at Amali. "[The restaurant] needs to be at 27-32% on our costs; how we get there, we fiddle around with and tweak. But at the end of the day, those numbers are the ones that matter."

Factored into those costs: food must be kept chilled before prep and cooking, requiring utilities, additional ingredients and labor. Then there's the presentation (like cutlery, serving ware and plates); the cost of labor for both the chefs, waiters, runners, hostesses, bartenders, etc; overheads like keeping the lights on; then incidentals, of which there are myriad for mom-and-pop restaurants.

But looking at the costs associated with a true farm-to-table item—and knowing how much restaurants struggle to break even, let alone profit, in NYC—it's easier to understand why restaurants have some basis for charging seemingly obscene amounts of money for something as "humble" as a chicken.

Still, as much as we know about the ickiness of conventionally-raised (aka factory farmed) meat—or how delicious a ribeye supposedly tastes after it's been aged versus not—most of us are on a Tad's budget versus a Peter Luger one. And while chicken is enjoying a moment in the haute spotlight, it's going to be some time (if ever) that the cheap wedding food selection gets elevated to bonafide baller status. Until then, we've got options.

#beasts and bottles
#chicken
#le coq rico
#nomad
#rotisserie georgette
#sasso chicken
#steak
#original
Do you know the scoop? Comment below or Send us a Tip