Is Artichoke Pizzeria the Manhattan Answer to Di Fara?

East Village pizzeria Artichoke has been open a scant two weeks, but the blogosphere is already abubble. All it took was one avid pizza geek kvelling to Slice that it’s on a par with Brooklyn's acclaimed Di Fara Pizzeria. This initial report led many to assume that this standing-room spot models its pies after those turned out by Dom De Marco, the maestro of Midwood.

The only similarity between Di Fara’s and Artichoke is the presence of the namesake vegetable. (For starters, unlike Dom, these guys don’t grab hot pans out of the oven with their bare hands.) That said, Staten Island natives Francis and Sal turn out first rate pizza, and they’re all about the artichoke. They’re clearly proud of their signature artichoke and spinach pie and are quick to boast that it’s the only one of its kind in Manhattan. Loaded with spinach, thinly sliced artichokes and spiked with pecorino romano, a slice is almost a meal in itself. The regular slice is pretty terrific, too. Purists may fault the crust on both as too crispy, but that didn’t seem to faze the customers scarfing down slices in the small space last night. 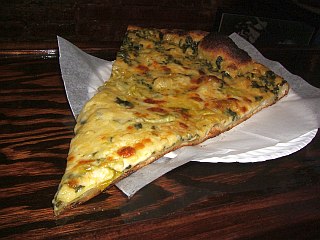 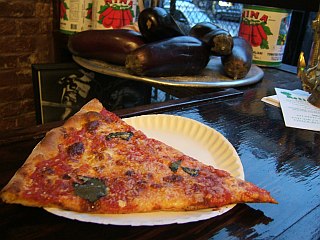 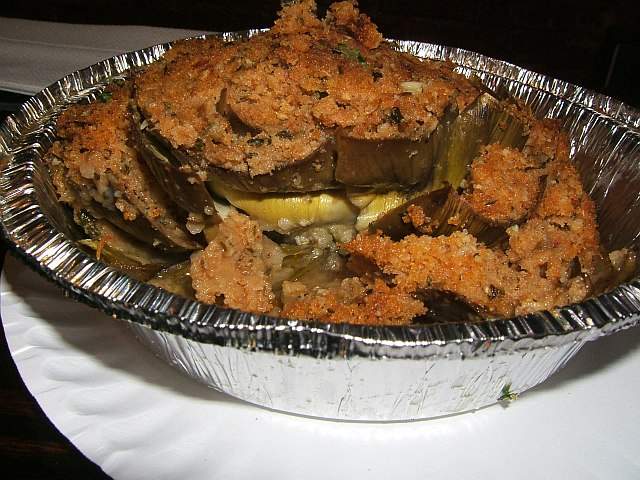 Artichoke pays homage to its namesake veggie with a dish that evokes nostalgic memories of Sunday dinners for Italian-Americans. A gigantic stuffed artichoke crammed with so much golden breading that there’s barely any green visible is anointed with artichoke stock before being warmed in the oven. Dredge a leaf, breading and all, into the warm liquid, and scrape the edible portion off with your teeth just like Mama taught you.

If you intend to try several slices and get a ’choke you might want to fast beforehand or bring along a friend or two. Expect things to get hectic in the coming weeks once 32-ounce traveling beers (i.e, styrofoam cups of Bud) are introduced. Manhattan pizza fans should all say a collective prayer that Artichoke's not the equivalent of Di Fara's. It'd be a shame to if it were to be overrun by ravenous pizza geeks from Midwood.

#artichoke
#Di Fara's
#east village
#pizza
#restaurant
#review
Do you know the scoop? Comment below or Send us a Tip