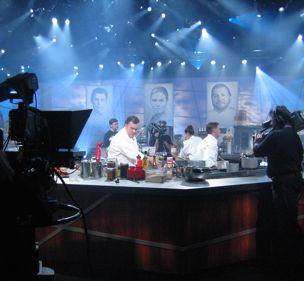 About a year ago, Village Voice restaurant critic Robert Sietsema attended a taping of Iron Chef America at the Food Network's Chelsea studios. Thanks to a friend's invite, the Food Network had no idea he was watching and waiting to blow the cover off the whole phony operation once the episode finally aired. Now Sietsema is here to report that the series is “more bogus than even I had imagined.”

How bogus is it? Well, for starters, what’s edited to look like “extreme urgency” on TV, with chefs hustling to finish up to five dishes in under an hour, is in reality just “drones going about their appointed tasks with well-tested recipes.” Sietsema confirms the chefs aren’t actually sweating it because they know what the “secret ingredient” is going to be in advance and are thus able to plan out what they’re going to cook.

Once the dull cooking round ends, Sietsema is shocked to see that the judging doesn't start immediately while the food is still fresh, but actually takes two hours to shoot. So guess how these slick Hollywood types pull it off – they have the sous chefs cook new versions of the dishes all over again during the judging process! Sietsema also thinks it’s bogus how Iron Chef Masaharu Morimoto pulled an expensive white truffle out of his pocket and grated it over one dish; challenger Fortunato Nicotra of Felidia had no such advantage, and lost big-time to Morimoto.

The whole 3,330-word exposé is enough to disillusion you with the entire TV game show industry. Let’s just hope Sietsema never goes to an American Gladiator taping and ruins that with his muckraking – some of us still need heroes to believe in. How shocked are you to hear Iron Chef America’s a hoax?

Photo by Liz Johnson, who had a better time behind the scenes.