Hunching over a steaming bowl of pork broth, slurping giant strands of noodles, nibbling tender hunks of chashu: these are the joys of eating ramen, especially when the frigid winds outside are whipping refuse directly into your eyeballs and any inch of exposed flesh is instantly converted into a walking ice cube. All the delights of a ramen-eating can be experienced at Ippudo, but for the autumn season, the consistently-lauded Japanese ramen chain has decided to try something a little more unusual for NYC's noodle soup scene, debuting Atsumori Tsukemen, a dipping-style ramen that's not found at most ramen-yas on this side of the Pacific.

To be sure, there are tsukemen ramens available in New York City—Minca and its sister restaurant Kambi offer a fine version—but Ippudo has turned the genre on its head a bit. Traditionally, tsukemen ramens feature cold noodles dipped in a hot broth; atsumori tsukemen employs hot noodles dipped in hot broth. Ippudo is taking this one step further by serving the hot noodles in a second hot broth made with kelp and kombucha that's light and faintly herbal. It looks so innocent, with its clear, pale green hue—but beware! That is some seriously hot (temperature-wise) broth. 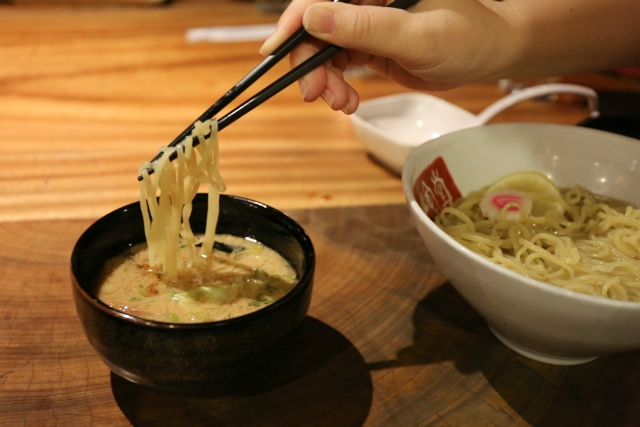 The noodles and tea broth can be eaten on their own and one can appreciate the subtle mineral flavors of the broth and the chewiness of the thicker noodles the restaurant uses for this style of ramen. But the tantalizing bowl of pork shoyu broth on the side is the real star of the show, especially the yuzu vinegar that brightens the soup with a tangy citrus flavor. Ippudo is known for their thick pork broth but the version here is not the stick-to-your-lips version; its got a super umami punch, though, courtesy of a gyofun fish powder made with bonito and sardines.

"We wanted to bring Japan here but it's difficult," operations manager Yusuke Nakamura told me, explaining that the additional step of dipping the noodles was confusing for some customers. Because many non-Japanese diners don't "slurp" their noodles with as much verve as those who grew up eating ramen often do, much of the porky broth doesn't make its way into diner's mouths. The suggestion of offering diners bibs was met with polite laughter.

It's absolutely worth braving the restaurant's notorious lines to try a bowl for yourself, considering this preparation isn't something often found in Japan, let alone the United States. Ippudo is currently offering their Atsumori Tsukemen at their original East Village location for $17 and Nakamura says the restaurant will be making T-shirts with depictions of the soup created by We 8 That. 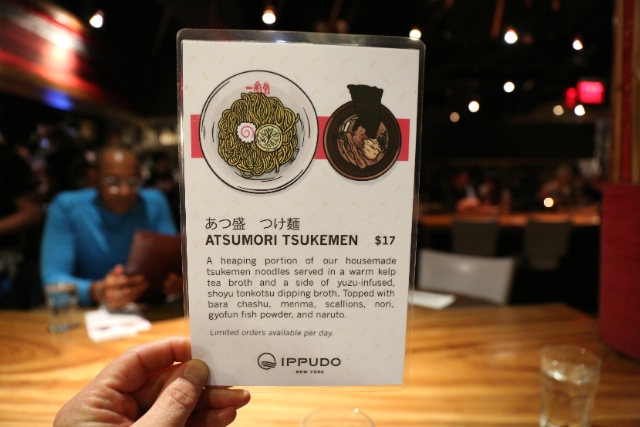 #Atsumori Tsukemen
#dipping ramen
#ippudo
#ramen
#original
Do you know the scoop? Comment below or Send us a Tip