Introducing The Caulfield, A Phony New Bar Holden Would Have Hated

If you really want to hear about it, the first thing you'll probably want to know is where this bar is and what its lousy childhood was like, and all that David Copperfield kind of crap. But we don't feel like going into it, if you want to know the truth. In the first place, that stuff bores us, and in the second place, J.D. Salinger would probably have two hemorrhages apiece if he was still alive to see this slick new saloon, inexplicably named after Holden Caulfield, one of the most enduring characters in modern American literature. Welcome, phonies!

The Caulfield is brought to you by the same owners who operated Vig 27, the bar that previously occupied the space and which New York described as "a blank slate for drinks after work." Caulfield opened a week or two ago, and still feels like a blank slate, though the press release promises that "like the rebel protagonist from the J.D. Salinger’s classic novel... The Caulfield sparks a feeling of time standing still. From its ornate metal and glass façade, to the soaring half dome ceilings that showcase salvaged lighting from a 1930’s theater, restored and repurposed for the space."

By now we're all very familiar with the atavistic Art Deco style they're going for, but here it comes off as even more sterile and strained that unusual. In a way, it's sort of fitting that the ersatz retro vibe clashes so incongruously with the Top 40 musical accompaniment, and the giant flat screen TVs behind the bar broadcast pro sports, not black and white movies. To be honest, we can't quite see Holden—who couldn't even hack it as manager of the fencing team—fitting in here, though there is a stage for "ambient live music," and the back room boasts a nice big fireplace. Look, there's Stradlater in the corner wearing your goddamn houndstooth jacket, snowing some girl in this Abraham Lincoln, sincere voice. 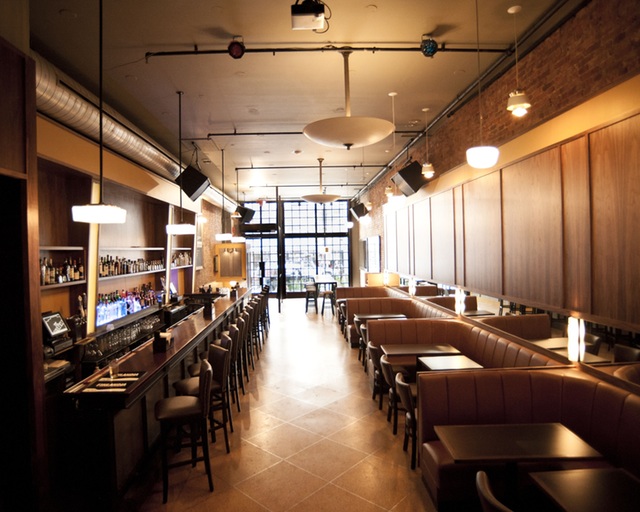 The food menu (below) consists of shared plates from Chef Dominic Giuliano, who emphasizes Northern Mexican cuisine—a real favorite of Holden's. And, of course, since "there isn't any night club in the world you can sit in for a long time unless you can at least buy some liquor and get drunk," The Caulfield offers specialty "classic" cocktails like the Liquid Lemmy, made with Bulleit Rye (get it?), Apricot Liquor, St. Germaine, Orange Bitters, and Lemon Juice. You can peruse the full menu below; we're told they cost between $8-$12 each. Goddam money. It always ends up making you blue as hell... kind of like a bar off Park Avenue that surely has J.D. Salinger rolling in his grave (and his estate calling their lawyers).

#holden caulfield
#jd salinger
#new restaurant and bar radar
#Park avenue
#phonies
#the caulfield
Do you know the scoop? Comment below or Send us a Tip