Though Grand Central Terminal has plentiful food options of its own, there's now a new dining destination located steps from the iconic transportation hub. Meet UrbanSpace Vanderbilt, a new food hall at Vanderbilt and 45th Street boasting fare from Roberta's, Daniel Delaney, Dough doughnuts, and more. They've packed 21 different food purveyors into the space, which was a former "Terminal City" waiting room dating back to 1929.

While all the options are delicious in their own right, there are a few standouts that make the market unique. Firstly, Briskettown creator Daniel Delaney has debuted his new chicken concept Delaney Chicken in the space, offering succulent drumsticks with a super crunchy crust. Roberta's, who've been something of a fixture at UrbanSpace's other ventures, are doing their pizza thing here, too, as well as their flaky garlic knots and other items from their Bushwick bakery.

No. 7, whose sandwiches are something to behold, are doing a completely vegetarian concept that includes their incredible broccoli tacos plus a veggie burger and other meat-free delights. Ditmas Park's fantastic Mimi's Hummus is also on the roster, plus tinned fish offerings—sounds weird, tastes delicious—from Maiden Lane, gelato from A.B. Biagi, French Onion Soup Crepes from Bar Suzette and Thai street food from Bangkok B.A.R. 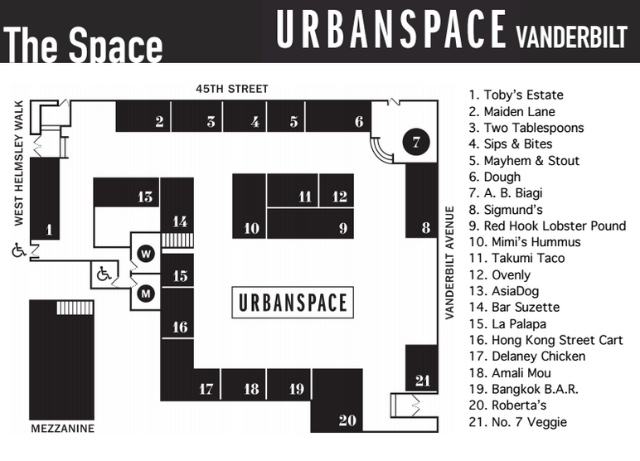