Inside The Mayanoki Sushi Supper Club At Brooklyn Oenology

One of the most memorable sushi dinners I've had since I had my mind blown at Sushi Zen didn't take place in a sushi restaurant, but at Brooklyn Oenology, a little winery and tasting room in Williamsburg. And the guys who organize the Mayanoki sushi supper club aren't even in the dining industry—David Torchiano and Josh Arak are just a couple of tech guys who became obsessed with chef Albert Tse, who had a 20 year run at Tribeca sushi institution Zutto. After Chef Tse left Zutto, they tracked him down at a lower profile joint and persuaded him to helm a series of private supper clubs for friends.

Mayanoki eventually outgrew the private residences and now it's a semi-regular event at the pleasant Williamsburg wine bar. Torchiano invited me to visit the club last week as his guest, and I was seriously impressed by the freshness of the seafood (all as locally sourced and sustainable as possible, of course) and the inventiveness of Tse's playful presentation. There's no ordering off a menu—the eight course meal is omasake-style, meaning you gladly scarf whatever the chef sends you.

And you're in very good hands; Tse's offbeat take on a Rainbow Roll, for instance, melds tuna, crab, and salmon in daikon, with a dash of garlicky sauce kicking it into high gear. His signature tuna poke features succulent wedges of fish topped with sesame oil, onions, onion, garlic, and peanuts, elegantly harmonizing flavors and textures.

Torchiano and Arak plan to eventually turn the supper club into a brick-and-mortar restaurant for Tse, but for now it's popping up regularly at Brooklyn Oenology, where the eight course dinner will set you back $105, which seems fair considering that price includes five wine pairings from the exceptional Brooklyn Oenology collection. Tickets are on sale now for two dinners on August 20th and 21st; the club only seats 16 and will sell out, so don't sleep on Albert Tse. 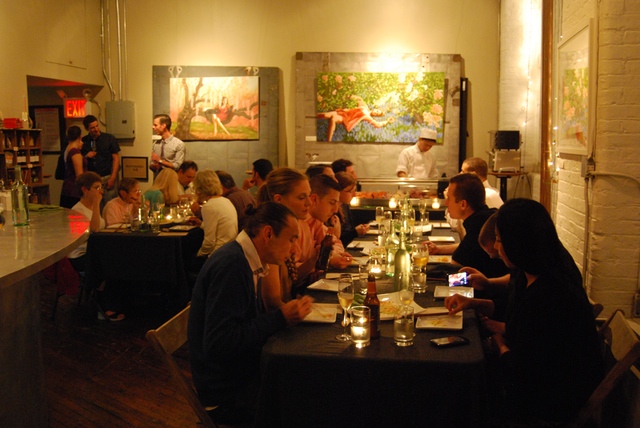