In a nondescript office building in Tribeca, one that houses a restaurant, an ophthalmologist, and a canine rehabilitation facility (complete with therapy swimming pool), there is also a farm in the basement. Growing more than 500 varieties of herbs and microgreens, Farm.One supplies area restaurants with fresh, locally grown basil, anise, cilantro, dill, and edible flowers, all grown hydroponically.

Visiting Farm.One is like entering a scientific lab. In a small entryway, founder and CEO Rob Laing hands us white lab coats and hairnets to wear, as well as booties to cover our shoes. As Laing introduces the space, a couple of employees sit behind him at a brightly lit counter, diligently planting seeds in trays divided into tiny squares filled with recycled coconut husk and peat. One employee sweeps past us on his way to a delivery.

Laing says they finish harvesting around noon every day, before starting to distribute the freshly picked herbs and microgreens to about three dozen local restaurants, many of which are within walking distance. For those further afield, Farm.One’s delivery people use bikes or the subway. Never delivery trucks.

The farm’s closest customer, Atera, has its kitchen literally across the hall. In fact, as Farm.One’s very first partner restaurant, Atera is the reason the farm is in the building in the first place. When Farm.One first opened in April 2016, it worked out of a small space inside the Institute of Culinary Education (ICE), right by the World Trade Center. But it soon outgrew the space, expanding last July to the 1200-square-foot former bike gym next to Atera’s kitchen. (They still use the ICE location for education and research and development.)

Walking into the garden, Laing points us to the hand sanitizer on the wall. “Guests and Staff: Sanitize hands NOW on entering farm” reads a sign directly above it. Pathogens from the street have potential to wreak havoc on the delicate ecosystem, especially considering that Farm.One doesn’t use any pesticides or sprays, instead depending on beneficial insects, like ladybugs, to keep its plants healthy.

The farm uses two different kinds of hydroponic systems—a deep water culture system, where the plants float on top, and a flood-and-drain system for the younger seedlings. There’s no soil anywhere to be found; instead the plants grow in filtered water mixed with biodigested plant material, fish waste, and fungi. “It’s like an organic soil mix, but liquid,” Laing explains. “When you have soil indoors, it’s really hard to control pests.” 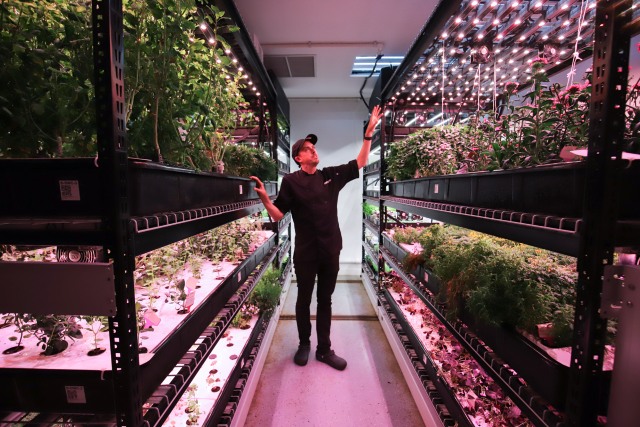 Everything at Farm.One is grown to order, each plant labeled with the name of the restaurant where it will ultimately end up. Working with 65 seed vendors in the US, Europe, and Asia, Laing says the farm grows a couple hundred different plants at any one time. The most popular orders are the many varieties of basil; the most expensive are the flowers, particularly the oxalis (65 cents per flower), a purple shamrock that has a lemony flavor.

As Laing takes us through the farm space, he turns the handles on the sides of the stacks, rolling the racks back and forth, like in a library storage space. He points out specific plants and gives us a taste of them--mustard greens, anise hyssop, bronze fennel, huacatay, wasabi arugula, marigold flowers. By far the most memorable flavor is a plant from the Brazilian Amazon called jambu (a.k.a. wasabi buttons), which induces a rush of saliva reminiscent of the tongue-numbing spiciness of Szechuan hot pot.

Laing notes that the jambu is there mostly just for fun (Farm.One also offers tasting tours five nights a week), but the rest of the plants on the farm are delivered to restaurants two or three times per week.

Oliver Lange, corporate executive chef of Zuma in Murray Hill, says that the Japanese restaurant’s herb and microgreen orders depend largely on the season. “For example, right now we are using micro mustard leaves for our signature sliced yellowtail sashimi with pickled garlic,” he says. “In the summer, we had a salmon dish with cucumber ponzu and cucumber flowers, as well as a sweet corn dessert using marigold flowers from Farm.One.”

Chris Owen, chef at Double Zero in the East Village, is particularly fond of Farm.One’s genovese basil, which he uses for the restaurant’s many vegan pizzas, as well as in spritzers at the bar. He says they get 5 pounds of basil delivered per week. In addition, all of Double Zero’s microgreens come exclusively from Farm.One.

“It has far and away a better product than 90% of the vendors in New York City,” Owen says. “They have such a love and appreciation for their product. Sometimes, it’s not as consistent, but I find that an aspect of the charm.” In the end, it all comes down to the flavor, “and beyond that, supporting local farmers,” he adds.

While neither Zuma nor Double Zero mention Farm.One on their menus, the fresh herbs and microgreens seldom go unnoticed. “The visual effect and the flavor are definitely appreciated by the guests,” Lange says. “Even if they aren’t advertised on the menu, they’re typically the finishing touch of each dish and really give a big impact for such a small ingredient.”