Inside The Food Court Madness At Flushing's New World Mall It almost feels wrong to say Flushing is a part of New York City. This sub-sector of Queens County is like our metropolitan version of Texas: a wide expanse of land fueled by its own stimulant, one that is wholly different than whatever the hell drives the faraway kingdoms of Midtown and SoHo, with no sense of this inherent pressure to assimilate to, or accommodate, the rest of us schlubs. Or maybe I'm getting it confused with Staten Island. What I'm really trying to say is that the Asian food in Flushing is no damn joke.

It's not a "You have to try it" but more of a "You actually need to cancel this weekend's plans and go." I ventured there this past Saturday with a group of neophytes (myself included) and we had no inkling of the Dionysian madness that awaited us as we descended down the escalators into the New World Mall food court.

The New World Mall's website claims it is the largest Asian indoor mall in New York. This is not the Sbarro's-tainted food court of your suburban years. Located within spitting distance of the Flushing-Main Street (last) stop on the 7 train, the New World Mall food court is what I imagine life is like without any problems. Perhaps the boldest collection of Chinese, Japanese, Taiwanese and Korean cuisine on this collection of islands we call home, 32 vendors of deliciousness watch your every move, offering you the chance to gorge yourself on their wares for no more than $15. Only the possibilities of more food can distract you: there is no cell phone service.

Let's talk dumplings. Many styles are readily available at almost every vendor in the food court, making it a bit overwhelming to find the pot sticker that's right for you. But hey, a woman hand-rolls them at the counter of the unnamed (sign says "Szechuan Dish" for some sort of indication) store in the north east corner of the food court, where you can grab eight dumplings filled with shrimp, crab and pork for $5. That may be above the asking price of Vanessa's or Prosperity Dumplings, but these dumplings definitely pack a much more tasteful and filling punch.

Then, over at Tao Rice Rolls, the crab meat soup dumplings (xiaolongbao) are prepared and presented to you in beautiful, compact, bamboo steamers, which can be rented out for a refundable deposit of $5. The six dumplings themselves are also $5. 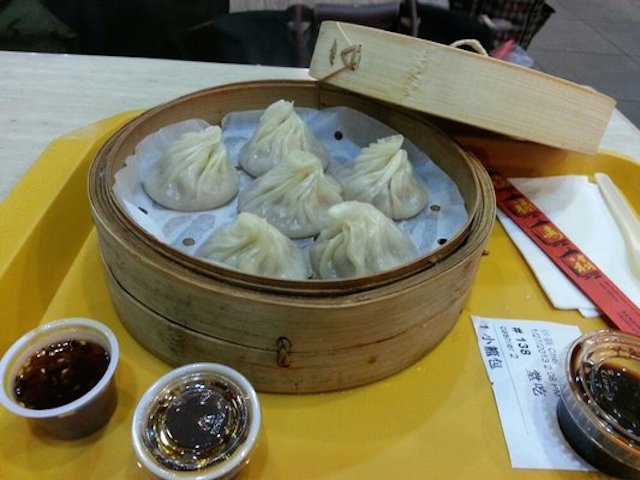 Wait for these to cool off, or else the soup will fall right out the bottom. (Yelp)

If (unfortunately) dumplings aren't your thing, check out the octopus rolls (also known as takoyaki) at Mojoilla Fresh. These balls of dough are filled with calamari, covered to your liking with a fish flake known as bonito and some sort of Sriracha-mayonnaise hybrid that we can only assume came from the fourth dimension. You can grab eight of them for $4.95 and it's in your best interest to find a companion to split these with. 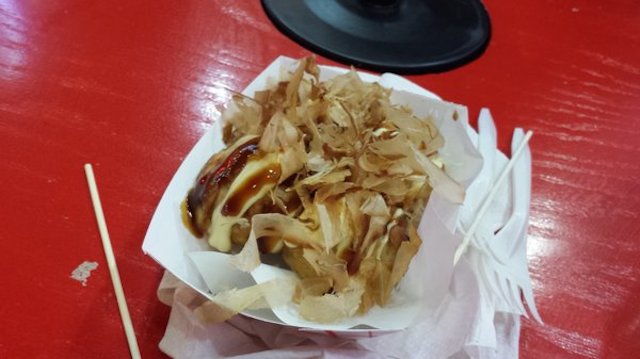 The finest takoyaki in all of the land. (Yelp)

Right next door is Clay Pot, a solid spot for sesame and scallion pancakes (under $3 each). They also serve dim sum in those fancy bamboo platters we mentioned before, except here, the employees unveil them to you in classic "The Price is Right" fashion. It's such a treat. 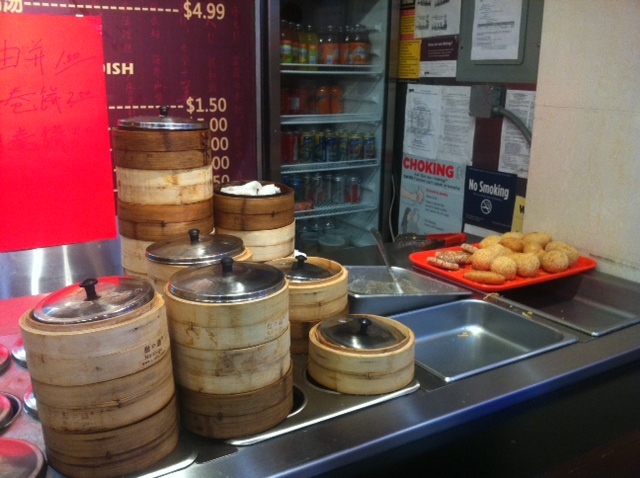 Once you've ingested enough pot stickers, move onto the entrees. Clay Pot is also a great place for bigger dishes, including the sleeper/strange hit of Saturday afternoon: chicken and frog over rice. The order took a while (we declined to ask why) but the poultry-amphibian creation was truly a sight to see. The big bowl of rice is filled to the brim with boiled chicken and frog parts. The chicken is capably tasty, and the frog tastes exactly like you think it would: dry, scaled, and questionably chewy. Sorry, Kermit.

As you meander through the labyrinth of tables, you'll notice the clientele there eating from these steaming vats of liquid known as hot pots. Some tables even come equipped with heaters and signs that say "For Hot Pot use only." Meals are served bubbling, as customers carefully pluck their food from the boiling broth, burning their tongues on every other bite. These cauldrons are definitely worth checking out, and New World Mall has a variety of shops to grab them from, including the aforementioned Tao Rice Roll. Most of the hot pot offerings do not exceed $8.

In addition to hot pots, Flushing dutifully recognizes the wok as one of the greatest inventions in mankind's culinary history. At some stands, you're handed a wok instead of a plate (hell yes). These woks are filled with anything you could ask for. Tianfu Spicy Wok is probably the best and most popular spot to get the job done. 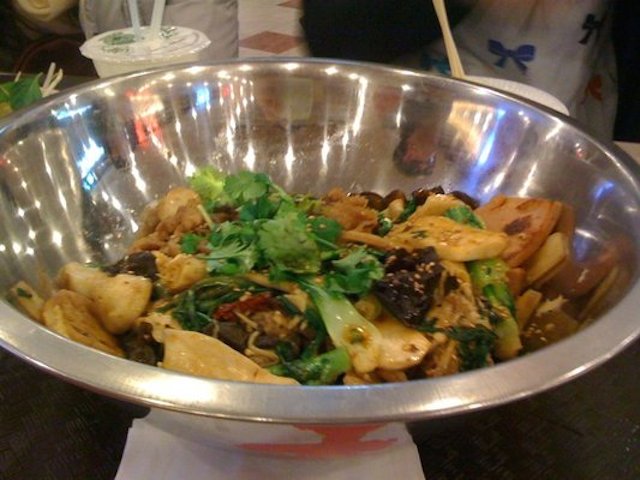 If you haven't collapsed yet, make your way over to Lanzhou Handmade Noodle. This place is like the New World Mall food court's equivalent of Xi'an Famous Foods—the famous spicy noodle just down the block on Main Street (or Lan Zhou on East Broadway) —except ten times as loud. If you miss your order, it's your own damn fault, because the cashier is fond of screaming every one at the top of her lungs. When her voice settles down, tell her you'd like a bowl of roast duck ramen ($7) and perhaps some dumplings in soup ($3). Both of these steaming hot dishes are full of noodles as thick as shoelaces, which are whipped up like a lasso right in front of you. They easily feed two to three people.

Exhale. You've made it to dessert, which is a rarity in the New World Mall. Clay Pot serves sugar dough balls reminiscent of the Italian zeppole on Mulberry, but the line is long at Kung Fu Tea for a reason. The bubble tea spot has a laundry list of different teas and tapioca balls to gaze at, and these drinks are the perfect digestivi for the sheer amount of sodium you just ingested. Recommendation: the Citron Tea ($2.50 for a medium), chock full of orange peels and tapioca balls.

This must be said: the food court is a warzone. There are no rules of engagement when it comes to finding a table. Once you establish a perimeter, you have to be more aggressive than a New York City cabbie, willing to hover over a departing family of five, with a fork and spoon already in hand. And, when you decide to leave the HQ for more food, make sure you have a proportional number of scouts seated to guard the base. Or else you'll be forced out in no time, which is the last place you want to be with a hot bowl of ramen in hand.

Best of luck to you and your loved ones.

#asian food
#flushing
#food
#food courts
#new world mall
#noodles
#original
Do you know the scoop? Comment below or Send us a Tip