Tucked away in a dark corner of Grand Central Terminal, there's a cocktail lounge that will transport you back to another era, when rail travel was more romantic and men looked like Don Draper. The Campbell Apartment started out as an office space for John W. Campbell in 1923. It was never a residence, but Campbell—a railroad tycoon who served on New York Central's Board of Directors—did entertain there, adding a piano and pipe organ, and often inviting around 50 guests to come hear famous musicians play private recitals. He even had a butler there, whose name was Stackhouse.

Under Campbell's lock and key, the room was transformed from a bare barracks to a galleried hall of a 13th century Florentine palace. When he died in 1957, things became a little dismal—the gorgeous space deteriorated as it went through various occupants. Through the years drop ceilings were installed, as it became a signalman's office, a closet that stored transit police guns, and at one point a jail. 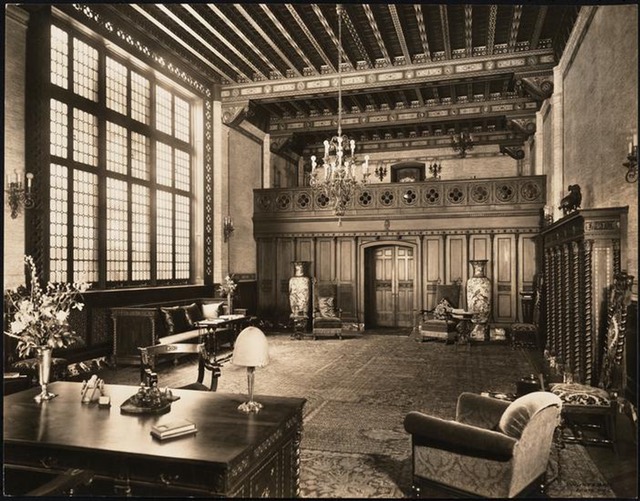 Campbell's office, 1923. (Photo courtesy of the Museum of the City of New York)

It wasn't until 1999 that the semi-hidden space opened its doors to the public as a bar, and Campbell's touches were carefully restored. The mahogany, the carpeting, the vases, and most notably, the safe he hid in the fireplace is now displayed there, a reminder of his wealth.

There are also claims that Campbell's ghost haunts the space—we were told that the Eastern Paranormal Investigation Center conducted an extensive examination there and validated the ghost sightings. A rep told us, "Some customers and staff have pointed out eerie incidents that have taken place at the cocktail lounge, such as unexplained gusts of cold air, taps from behind without anyone in sight, sounds of an organ playing, and doors mysteriously shutting on their own." Owner Mark Grossich has corroborated these paranormal activities.... but after one of Paris DuRante's Prohibition Punches you won't mind.

To get into the Campbell Apartment, you simply must dress the part. They require proper attire: no baseball caps, t-shirts, or athletic shoes. Sadly, however, there wasn't a fedora in sight when we dropped by.

The Campbell Apartment is located inside Grand Central Terminal (off the Vanderbilt Avenue entrance), and their hours are Mon-Sat 12 p.m to 1 a.m., and Sunday they close at midnight.

#bar
#campbell apartment
#gct
#grand central
#grand central terminal
#original
Do you know the scoop? Comment below or Send us a Tip