Paulie Gee's in Greenpoint makes some of the city's best pizza, but excruciating table waits and a notorious no-takeout policy means that it can be frustratingly difficult to actually eat there. Which is one of the reasons why two years ago owner Paul Giannone decided he needed another storefront for feeding this pizza-crazy town. And yesterday, finally, it opened for real: Paulie Gee's Slice Shop, a spacious throwback-looking joint on the corner of Franklin and Noble Streets.

The genre here is classic NYC fold, with a couple of square-pie Sicilian options coming soon. Chef Andrew Brown is starting things out with the basics. There's a Cheese slice, a Pepperoni slice, a pepperoni slice with Mike's Hot Honey ("The Hellboy"), a Sausage slice, and a sauceless Mootz. I tried all of these this week, and they were all excellent. Whole eight-slice pies are also available, as are several vegan versions. And if you want, you can box anything up and take it home! There's even going to be delivery, via Caviar, available shortly. For dessert there are icees from L&B Spumoni and the Lemon Ice King of Corona. 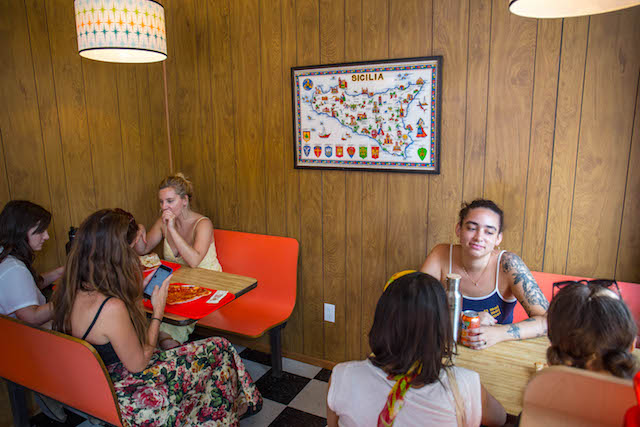 The space itself is fantastic. There's seating up front in four orange formica booths, with a couple of sparkly green cushioned chairs at a counter by the window. The back dining room, which doubles as a kind of sports bar—beer and wine are served, and there are multiple large flat screens hanging on the walls—is almost three times as big, with windowed garage doors letting in enough light and street-energy to keep it from feeling like a faux finished basement.

Retro details abound, including framed Yankees memorabilia from the 1970s, ancient Coke machines, and an Atari system atop a one of those old TV sets. Less nostalgic are the prices: a slice costs around $4, and pies will set you back anywhere from $22 to $30. Despite some controversy when Giannone first announced his project, on opening day the neighborhood embraced the Slice Shop, with a steady stream of customers showing up in the middle of of a blistering hot afternoon to get their pizza fix. 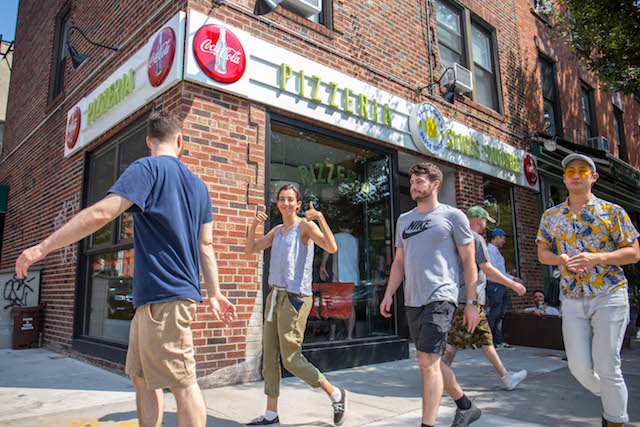 Paulie Gee's Slice Shop is located at 110 Franklin Street at the corner of Noble Street, and is now open Sunday through Thursday from 11 a.m. to midnight, and Friday and Saturday until 2 a.m. (347-987-3747; pauliegee.com)

#brooklyn
#greenpoint
#paulie gee's
#paulie gee's slice shop
#pizza
#original
Do you know the scoop? Comment below or Send us a Tip