Gossip columnist and radio man Walter Winchell (the inspiration for the Sweet Smell of Success scoundrel JJ Hunsecker) once called the Stork Club "New York's New Yorkiest" establishment—from his private table, #50, he reported on what he saw and heard.

The club opened in 1929 (as a speakeasy) by native Oklahoman and ex-bootlegger named Sherman Billingsley, and eventually shut its doors in 1965 (exactly one year before his death, to the day). The club was first housed at 132 West 58th Street, but in 1931 moved to 3 East 53rd Street after prohibition agents shut it down. By 1936 the joint was grossing a million dollars, and in 1946 Billingsley purchased the entire building for $300,000 cash, evicting all tenants (mostly doctor's offices) and expanding the space.

According to LIFE, Billingsley rarely missed a night at his club, "shaking hands, slapping backs, greeting movie stars, musicians, powerful pols and famous athletes, keeping the booze flowing, playing cards with the clientele." He also had secret hand signals for the staff, that he'd flash discreetly while sitting with customers—these ranged from "give the customer a bottle of perfume" to "no need to pay attention to these folks." Joan Crawford was amongst one of the guests to get the former hand signal:

In his memoir, Billingsley wrote that the club "was founded as a front for a nasty trio of Jazz Age mobsters, including Owney Madden, owner of the Cotton Club. He says he thwarted schemes by Jack (Legs) Diamond and Dutch Schultz to take over the Stork Club and that he was kidnapped and held for ransom by gangsters muscling in on the booming business." He allegedly purchased his way out of this mess. 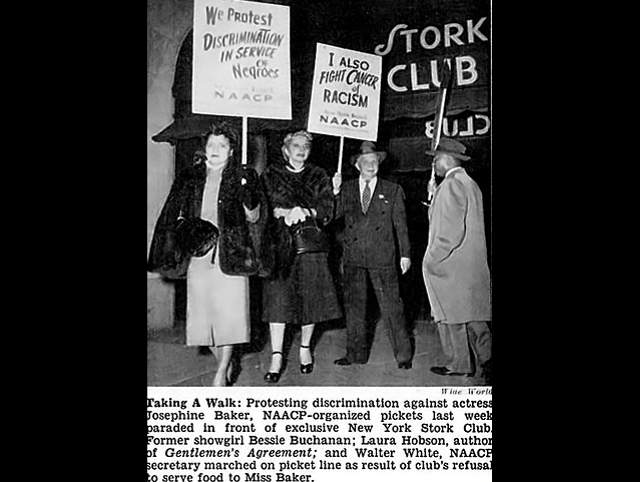 During the height of its popularity, everyone from Lucille Ball to J.D. Salinger to the Kennedys and the Roosevelts were patrons. (In 1951 singer Josephine Baker famously accused the club of racism for refusing to serve her.) Click through for a look back at its glory days, including some of those famous hand signals.

#flashback
#history
#stork club
Do you know the scoop? Comment below or Send us a Tip