Inside Miracle On 9th Street, One Of NYC's Holiday-Themed Pop-Up Bars For its 5th consecutive year, Miracle—a Christmas-themed pop-up bar—has landed in New York. This year, there are three locations in NYC (and 80 total all over the world), and they've partnered with "notable tiki-connoisseur Jeff 'Beachbum' Berry." (On that note, there is also another Miracle outpost called "Sippin’ Santa at Boilermaker presented by Jeff Beachbum Berry." Pop-ups are confusing!) Anyway, this week we dropped by Miracle on 9th Street in the East Village.

The interior is, thankfully, not a sleek-looking Yuletide spot—it's much more Clark Griswold than Margo and Todd. Expect big colorful strings of bulbs, plush Santa gear, old Fire King mugs, and plenty of evergreen. There's a space dedicated to Hanukkah, as well, with twinkling blue lights, tinsel and dreidels.

Jeff "Beachbum" Berry and bartender Brad Smith have also created some holiday-themed tiki drinks (for Sippin' Santa), including the Kris Kringle Colada (Dark Jamaican Rum, Cynar, Allspice, Lime & Pineapple Juice and Cream of Coconut). But the ultimate offering is the Yippee ki-yay Motherfucker, a nod to what some say is the best Christmas movie of all time; that one has sweet potato, rum, and marshmallow orgeat, among other things.

You can also buy the vessel all of these are served in—according to a publicist for the chain, "All cocktails will be served in Cocktail Kingdom's custom Miracle glassware, from mugs to coupes, highballs and rocks glasses. Many locations will have these items available for purchase with Miracle donating 10% of select glassware sales to Action Against Hunger." 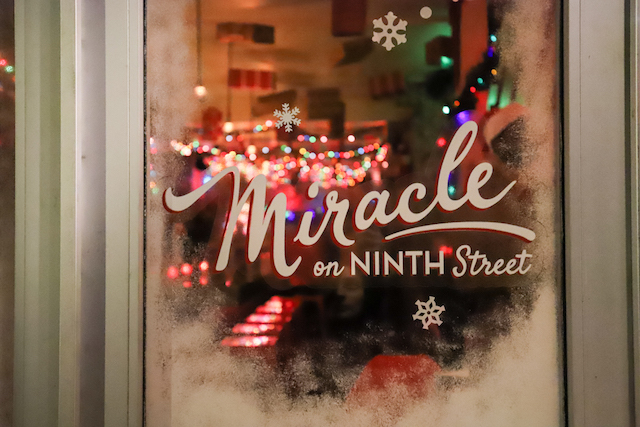 Other Miracles are on 12th Street, and in Williamsburg. Find locations and hours here. They will be open through December 31st. It's probably best to avoid all of them on December 8th 🎅

#bar
#cocktails
#miracle
#miracle on 9th street
#pop-up
#sippin santa
Do you know the scoop? Comment below or Send us a Tip