The old Brooklyn Ale House, a popular Williamsburg dive that recently closed after 17 years in business, is now George & Jack's, the latest pitch-perfect watering hole from the team behind Skinny Dennis, Rocka Rolla, and Lucky Dog. But unlike their recent high-concept ventures, owners Sal Fristensky and Bill Mack are taking an understated approach to George & Jack's, subtly enhancing the no-frills essence of its predecessor while smoothing out the rough edges. And, of course, they've vastly improved the beer selection.

The biggest change to the decor is the disappearance of the pool table, which made room for an extension of the bar to the back corner. Farther back, what was once a small office/storage space was cleared out for pinball games and adorned with illuminated Breweriana signs. The old Brooklyn Ale House sign has been brought in and preserved along one wall, and there's a Galaga/Pac Man game tucked away in one corner by the jukebox, which runs the gamut from Nancy Sinatra to Lou Reed to Joe Walsh to Steely Dan.

The walls are lined with beautiful vintage photographs of old New York, and high above the bar you'll find a pair of well-lit portrait photos—that's Fristensky and Mack's eponymous fathers, George and Jack, who both passed away over the course of the past year. The bar, in Fristensky's words, is "sort of our homage to an old school Brooklyn bar. It's the kind of place our dads might want to sit and have a beer. It's not an old man bar, but an old man would feel comfortable here. It's not trendy, it's like jeans and a T-shirt." 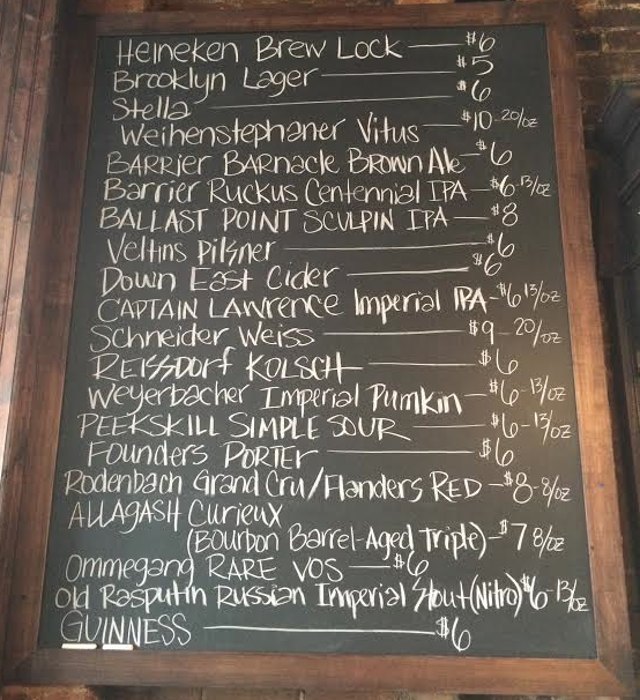 House cocktails, ranging in price from $8 to $10, include a Sazerac, an Old Fashioned, and a Boulevardier: Old Grand-Dad, sweet vermouth, and Campari. Nothin' snooty.

Fristensky is particularly proud of the bar's Heineken "BrewLock," which he says yields the "best tasting Heineken anywhere." It's produced in a special plastic keg with a pressurized outside chamber that forces beer out of the inside chamber without any CO2. "It's a different Heineken altogether," Fristensky declares. You can be the judge of that starting tonight, when George & Jack's officially opens to the public.

#george jacks
#new restaurant and bar radar
#williamsburg
#original
Do you know the scoop? Comment below or Send us a Tip