Inside Butter & Scotch, The New Bar-Bakery Hybrid In Crown Heights You can have your martini and eat cake too at Butter & Scotch, a new Crown Heights establishment that's a bakery by day and cocktail den by night. Though really it's both things all the time, especially during the evening hours when the bar serves up specialty cocktails alongside mini cupcakes, cookies and lots of other confections baked on site. The concept is the brainchild of Keavy Blueher and Allison Kave, two bakers and Smorgasburg vets whose successful Kickstarter campaign allowed them to open up the Franklin Avenue spot and live out their "drunk baking" dreams.

"We have definitely gotten people who wander off the street and I think at first it's more like, 'Oh, this is an awesome bar' and are surprised by the dessert aspect of it," Blueher explained to us. "But we have desserts set up in the front window and our kitchen is actually two storefronts that we put together; you can see the bakers in the kitchen working right next to the bar."

You'll see them mixing up batters and doughs for things like their Birthday Cake, a nostalgia-inducing vanilla layer cake complete with multi-colored sprinkles and pink frosting. The cake actually came to be because of a mistake. "Right before we opened, one of my bakers accidentally put in about half the amount of flour in the cake that she was supposed to and it completely sunk," says Blueher. "We were like, 'We'll work with this anyway,' and it ended up being the most delicious vanilla cake I've ever tasted ever and I'm super excited about it."

Other baked goods include cookies, mini cupcakes and things like their Negroni Pie, which has developed something of a following. They're also doing great things with ice cream, like the S'mores Pie Shake, and next week they'll begin work on different types of sundaes with brownies and chocolate chip cookies. "I'm just a big sundae fan," Blueher admits.

Their bar program gets equal weight in the operation, especially the specialty cocktails created by Jen Marshall as a complement to the desserts. Of those, Blueher says the Honey Chile Rider has been the most popular, a passionfruit drink made with New York Distilling Company gin, lemon juice and Mike's Hot Honey. "People typically stick to the menu, but you can absolutely come in and order a rum and coke or whatever you want," according to Blueher. That also includes the Lager and Chocolate Stout from Brooklyn Brewery, Lagunitas IPA and a Doc's hard cider. And don't miss out on the homemade Greyhound Jell-ohhh Shot, served with a Miller High Life for $6.

For now, the bar opens daily at 5 p.m. for drinks, desserts and such, but they'll open earlier on the weekends for a brunch service. It'll be the perfect time to serve their biscuit-based breakfast sandwiches, which include a bacon egg and cheese and BLT. Look for a to-go window to open up earlier once the weather gets warmer. 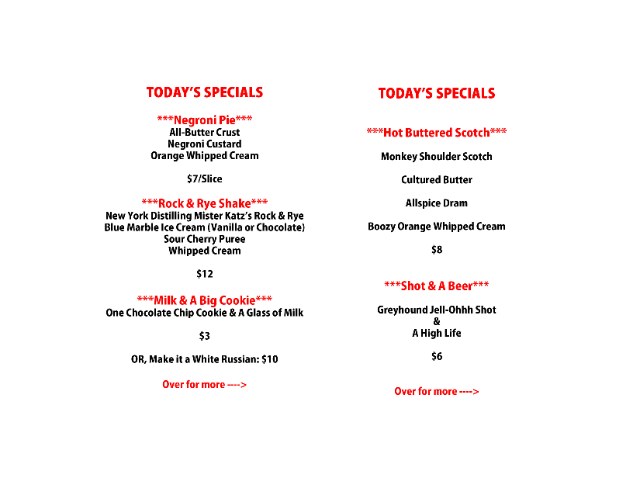 #bakery
#butter and scotch
#Crown Heights
#new restaurant and bar radar
#original
Do you know the scoop? Comment below or Send us a Tip