The nondescript factory buildings and litter-strewn sidewalks off the Morgan L stop aren't much to look at from the street, but inside many of the repurposed buildings are hidden treasures—if you know where to look. The first thing that hits you is the smell; vaguely sweet, pungent, ticklish in your nostrils. It's the byproduct of the spicy soda being made at Bruce Cost Ginger Ale, which turns out unfiltered fizzy drinks in a small but productive factory in a quiet section of rapidly gentrifying Bushwick.

If you're not familiar with the name, you might recognize the product by its glass bottles filled with cloudy liquid and sediment, the result of Bruce Cost's proprietary non-filtration method. For a relatively tiny operation, the ginger ale has a large reach, turning up in markets and restaurants all over the country and abroad. Customers in New York and Los Angeles make up about two thirds of the operation, with restaurants like Momofuku in NYC and the Slanted Door in San Francisco early adopters.

The Brooklyn-born brand opened a month ago in its current digs, moving from a space in a former brewery near the Montrose L stop that they shared with a dumpling and noodle factory. The new spot on Johnson Avenue is the site of a former garbage facility, though it's as far removed from its former incarnation as can be, replacing trash with the spicy scent of freshly ground ginger. It's a small team at work, consisting of Cost, his partner Terry Tang, his marketing manager Kevin Li, three other full-time office employees and a dozen or so workers on the factory floor. 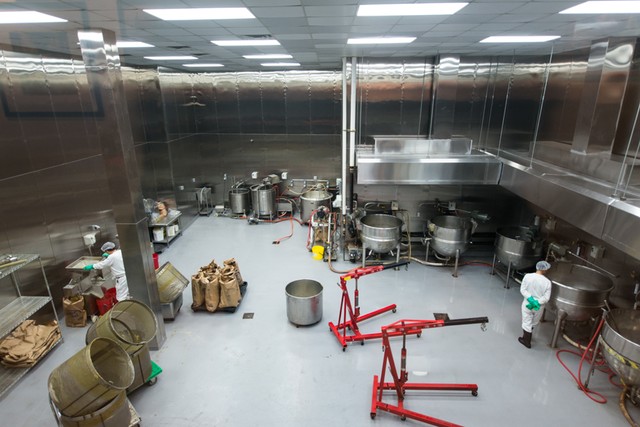 Cost's love affair with ginger began after publishing his book Ginger East To West, a history of the root that was published in 1984. He went on to sell his homemade sodas at his restaurants in San Francisco and Chicago, ultimately deciding to pursue his passion project of running a full-scale ginger ale company.

The recipe and methodology for production are kept under wraps, but Cost tells us the facility goes through 60,000 pounds of ginger per month. They use "Hawaii-style" ginger from China—where the plant was originally found—which boasts larger bulbs than plants from other parts of the world. Besides the original flavor, the facility makes Passion Fruit, Jasmine Tea, Pomegranate-Hibiscus and even a lower calorie "66" version that uses monk fruit, a Chinese fruit that adds sweetness but no additional calories. 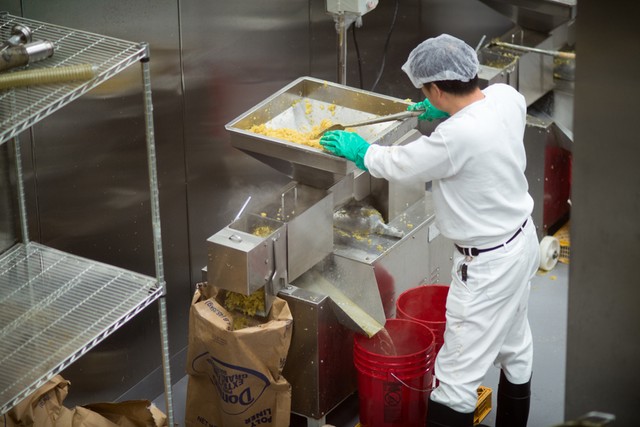 The Bushwick facility handles all of the recipe creation, but bottling actually takes place in an old brewery in Pennsylvania. Cost recalls difficulty finding a bottler due to the product's ginger dregs, and anticipates similar issues when they undergo expansion to accommodate increased demand. As it stands now, the ginger kitchen ships 200-gallon tubs of syrup to the bottler, who adds carbonated water and packages the bottles and cans for shipment.

The Brooklyn headquarters serve as more than just a laboratory, though Cost and his team do taste-test each batch of product so they can constantly tweak the recipe. When renovating the building, the team decided to transform a second floor concrete slab into a mini tasting area and "bar," where they host visitors from area restaurants for sampling. Recently, David Chang and his team swung by to taste product and discuss pairings with liquors like rum and gin; Cost hopes to continue this with other restaurants who are interested in artisanal sodas.

Connecting with the local Bushwick community was also part of the larger plan, and the facility includes murals from local street artists and a lobby adorned in Brooklyn artist Shantell Martin's signature doodle-like drawings. When things get further settled, the lobby will be open to curious locals and travelers from distant lands across the river who are interested in the sweet, all-natural and even medicinal qualities of Cost's product; if you suffer the too-much-booze tummy trouble, seek out a case of this stuff immediately.

#bruce cost ginger ale
#bushwick
#ginger
#ginger ale
#original
Do you know the scoop? Comment below or Send us a Tip