Inside A Unique Yiddish Farm Thriving 50 Miles From Manhattan

There's a grain silo behind the house, and a chicken pen across the road. On a shallow rise above the fields, a shed that stores crates of garlic. This upstate farm looks like any other, except the farmers are speaking Yiddish.

These farmers have been living on the 227-acre property in Goshen, New York, an hour from Manhattan, since May. Some are religious, while a few never had a bar or a bat mitzvah. Most of them went to colleges you've heard of before. All of them are between 18 and 27-years-old. They drink beer with dinner. And they're on the farm to learn, practice, and speak the thousand-year-old language of Eastern European Jews that few people outside of ultra-Orthodox communities still speak daily.

"It's the only place outside a Hasidic community where someone can go speak Yiddish all the time among people in their 20s," said Naftali Ejdelman, who founded the farm in 2012 with his friend, Yisroel Bass.

Yiddish was spoken by thousands of people in the streets of lower Manhattan one hundred years ago. Yiddish-speaking émigrés fresh from Eastern Europe kibitzed in shops and tenements on Ludlow and Orchard Streets, schmoozed on street corners and in the Yiddish theater on Second Avenue and 6th Street—and if aspiring politicians wanted to make a spiel, they stood on soapboxes in Tompkins Square Park.

But the native Yiddish-speaking population quickly dwindled after World War II and today, nearly all Yiddish speakers in New York live in the Hasidic communities of Williamsburg and Crown Heights, or in Hasid-dominated towns upstate, like Kiryas Joel and Monsey. The Yiddish speakers and establishments of Lower Manhattan have all but disappeared.

So fifty miles north of Houston Street, the Yiddish Farm in Goshen harkens back to a time when Yiddish was a part of daily life for non-Hasidic Jews. As far as its founders and students know, that makes the farm unique. 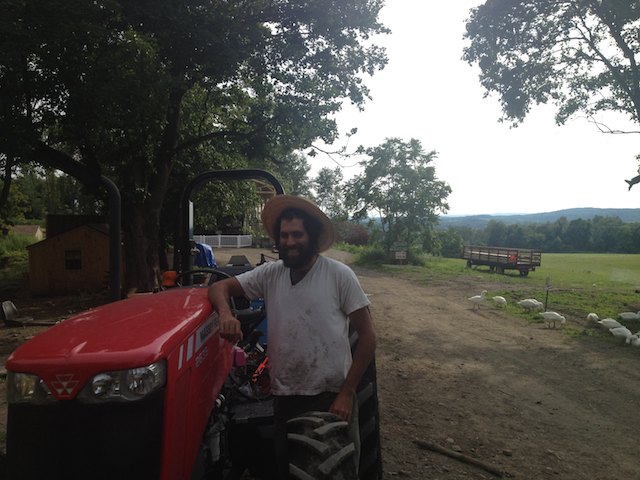 "There is no Yiddish land, but this is a place where Yiddish is the dominant language," says Eli Davis, a 20-year-old who worked for four months in a Seattle movie theater saving up money to learn Yiddish on the farm. "I've never heard of any other place where people speak Yiddish every day, besides Hasidic communities."

The farm is in its second year as a summer language immersion program, but the residents I spoke with would like to see it become a full-fledged, year-round Yiddish-language agricultural community—currently, only Naftali and Yisroel live on the farm after the summer months.

Yiddish is taught in classes at a number of universities across the country, but no other programs teach it as an integral part of daily life. Everyone cuts garlic, cooks meals and tends the animals using the Yiddish they learn during afternoon classes. Most start with no knowledge of the language.

"When you have to get an idea across, you do it. Certain things just have to learn," said Lily Weitzman, a 25-year-old from a secular family in Brookline, Massachusetts. "Like, 'Bring the compost to the chickens.' "

Yiddish Farm's biggest crop is garlic, which is sold to local communities and at a farmer's market in Riverdale. The farm is also growing wheat to make into matzo. There are twenty-nine geese, four sheep, and numerous chickens on the farm, and the harvest includes tomatoes, basil, watermelon, squash, horseradish, onions.

On a typical day, students farm in the morning and take classes in the afternoon, where they learn Yiddish from Naftali and guest instructors. A total of 28 students studied on the farm for at least some time this year, and seven core students are there for the whole summer.

I stopped by Yiddish Farm one recent afternoon as the group was sitting down for lunch in the largest room of the main cabin, where Shabbos dinners are served. It's a bright day, but inside, the single-story house is dark and comfortable. Everyone sleeps and showers in bungalows near the main house, which has wireless internet.

There are several shelves filled with Yiddish books in the classroom and dining room, including a Yiddish translation of The Hobbit. A single TV is available for watching movies in Yiddish.

About a dozen of us sit down at the table, and we serve ourselves potatoes, veggie patties, beans and salad, some of which was grown on the farm. English is not spoken, and conversation is all in Yiddish. I speak German, which shares a lot of vocabulary with Yiddish, so I get the gist of what people are saying.

Someone mentions a study about paraplegics being more satisfied with their lives than lottery winners, which causes some disagreement. Talk turns to the former cook, who quit halfway through the summer and whose favorite cooking ingredient was apparently mayonnaise. There's an argument about the West Coast/East Coast hip-hop feud of the 1990s, and people start comparing Orthodox Jews to Rastafarians.

"Okay, so then which Yeshiva did Snoop Dogg go to?" jokes Naftali, the co-founders of the program.

Stevie Wonder plays on the speakers in the kitchen as the dishes are cleared, and Yisroel Bass, the second co-founder of the group gets a call from an English-speaker. He's allowed five words of English. Naftali holds up his fingers. "Okay," says Yisroel into the phone. Naftali puts a finger down. "Mhm," says Yisroel. He's got three words left. "Definitely...okay." He's at one. "Goodbye." 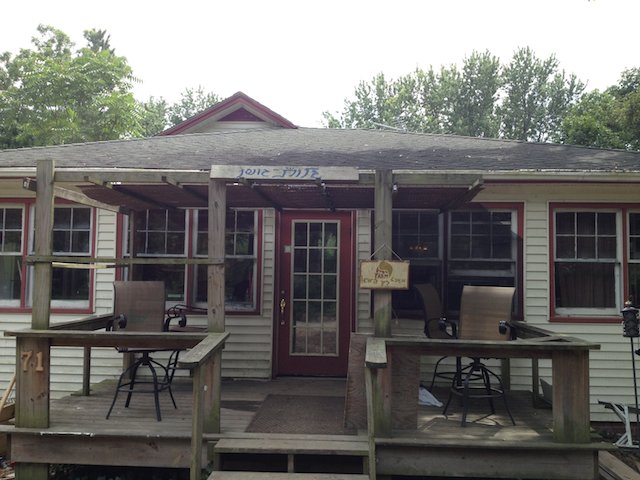 The main house on the farm, with a classroom, dining room, and kichen (Samuel Frizell)

Some students on the farm told me they are there for a very practical reason: to speak with their family in their native tongue. Several have grandparents, or even a parent who speak some Yiddish.

"It felt like best only non-religious thing I could do to relate to my mom and her side of the family," said Rebecca Galpern, an eighteen-year-old student at Baruch College who grew up in a secular household in Tribeca and whose mother was raised around Yiddish.

Eli also invoked the classic literature of Yiddish writers like Isaac Bashevis Singer and Sholem Aleichem. "For me, there's definitely nostalgia. After World War II, a lot of people didn't want to have anything to do with shtetl Judaism. Learning about that is important."

Yiddish is not only a way to learn about their past, students told me, but it's a way to embrace their Yiddishkeit, or Jewishness in their everyday lives.

"You can work like a dog to learn a language, but there's got to be a lot of passion to learn a language like Yiddish. And sometimes that has to be a longing to connect with you culture, a longing to belong to your past," said Yocheved Tupper, a 24-year-old who grew up in Maine and on the West Coast. "When you talk about language, you talk about the core of who someone is." 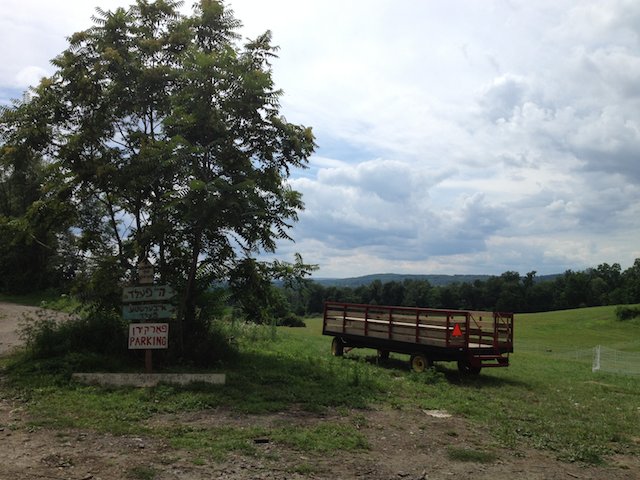 I stroll out of the house after lunch with Yisroel, one of the farm's co-founders, who stands well over six feet tall and has a thick black beard and peyos, or side curls. He's the head farmer on the property, and at lunch, he wore a straw hat at the table as he munched on raw garlic cloves. A gaggle of geese putters around the water tubs in the backyard, and we make our way to some chairs overlooking the hayfields.

"It shouldn't be weird that we're speaking Yiddish on a farm in the Catskills in 2013," Yisroel says. "Sixty years ago, seventy years ago, this was normal."

"The farm is an entirety, a whole," Yisroel says. "Everything's happening here. People are learning, people are taking care of a house and taking care of each other, davening [praying] together, celebrating Shabbos together. Holidays. An entire life could happen here."

Yisroel grew up in a mildly religious household on Long Island and began learning Yiddish in his late teens. He studied philosophy at City College while he formulated a vision of Judaism that involved living in a Yiddish-speaking community devoted to keeping Shabbos and using the language as a means to learning the Torah. Yisroel is quieter than most on the farm, perhaps a little more religious, and spends the most time in the fields.

On the farm, he envisions a core community of ten or more families of Yiddish speakers that live there year-round. About one-fifth of Yiddish Farm's budget comes from student fees, which run to a total of $4,000 for the eleven-week program, including room and board, and the rest comes from produce sales at local farmers markets and grants. But eventually, funding could come solely from produce sales, as well as tuition paid by a rotating group of students that would stay on the farm each summer, Yisroel said.

"Yiddish has been taken away from them and they're looking to reconnect with it and have it be a meaningful part of their life," Yisroel says of the students. "Or at least to better understand their history as Ashkenazi Jews."

Every week, Yiddish Farm drives into Manhattan and sets up a stand outside the Jewish Community Center on the Upper West Side, selling garlic and a homemade pesto garlic dip. By five o'clock on a recent Sunday, the group has sold a few hundred dollars worth of dip. 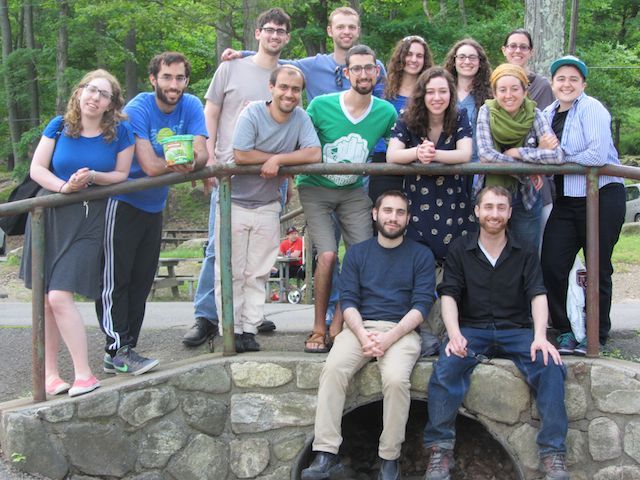 The students are about to begin their last week on the farm, and they're thinking about what role Yiddish will play in their lives if they don't come back for another summer.

"It's different to be Jewish in English than it is to be Jewish in Yiddish," says Tsipore Angelson, 29, who grew up in a secular family and spent several years in China. Earlier this summer she learned Yiddish for a week on the farm and comes back to help out sometimes. She still speaks Yiddish at home with friends she made on the farm.

"The whole culture lies in the language," she continues. "This is a vital culture that didn't die. This is a language that young people want to be a part of."

Max is going to graduate school next year, and he wants to speak Yiddish in the future if there's a community for it.

"It would be cool to speak Yiddish with my kids," said Max, as he sits in front of a stack of garlic cloves. "It's very familiar."

Sam Frizell is a reporter living in Brooklyn who has written for Reuters and the World Policy Journal.

#goshen
#judaism
#language immersion
#yiddish
#longform
#original
Do you know the scoop? Comment below or Send us a Tip