Inhale This Outrageously Large Sandwich For Glory (And For Charity)

Blue Ribbon Fried Chicken has a challenge for New Yorkers: eat the sandwich pictured above in under five minutes. Do so, and you'll be "entered to win" a free Hail Mary Platter (25 wings, 25 chicken tenders, and one side); no guarantees except indigestion then. If you're not up to the quick eating antics, score the Smorgasbird sandwich—two classic Blue Ribbon Fried Chicken cutlets with caramelized pineapple, shredded lettuce, tomato, and crunchy pickled cucumbers, doused in Blue Ribbon special sauce, and finally stuffed with Game Day Fries (fries with BBQ pulled chicken, aged cheddar, sour cream, smoked bacon and pickled peppers)—for $15 at the East Village restaurant; $5 of that purchase will be donated to the National Multiple Sclerosis (MS) Society. 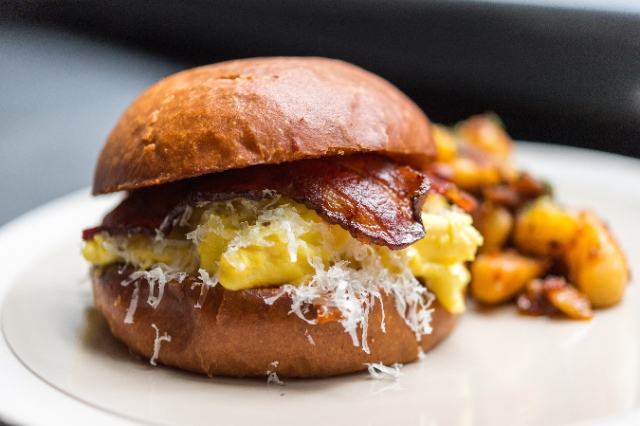 Jose Garces's Basque-inspired restaurant Ortzi debuts a Basque-inspired brunch, offering dishes like The BEC Bocadillo with egg, Manchego and bacon on a brioche bun; Sangria Pancakes with stone fruit, sangria syrup, and canela whipped cream; and an Ortzi Burger with franco-basque sheep's milk cheese and onion jam. A specialty brunch cocktail is the Ajea, made with Aperol, blood orange, Cointreau, and Bere Aran Sidra. Stop by the Midtown eatery between 11:30 a.m. and 2:30 p.m. on Saturdays or Sundays to indulge.

The Hester Street Fair will be celebrating July 4th a few days early with a Total Independence BBQ party they're throwing Saturday. Beginning at 11 a.m., stop by the LES market for a special South American style roasted pork, marinated for 24-hours and roasted for five hours, which vendor Charrúa will serve with sweet potatoes and arugula for $10 a plate. Also on hand: $3 beers, music from five different performers, and their regular lineup of dozens of other food vendors.

Williamsburg's wine bar The Four Horsemen will offer a prix fixe, family-style lunch on Saturdays and Sundays, the menus for which they'll announce via Instagram noon on Saturday. Last weekend's menu included a chilled bean salad with fried torpedo onions and lovage, sweet potato rolls with cultured butter, roasted duck breast with stone fruit and nuts, and a dessert of lemon verbena ice cream with sour cherries for $28 per person, which will be the price for these lunches going forward. Look for specials on wines, too, like the $10 pours of Brendan Tracey's Pineau d'Aunis magnums from last week.

Hybrid bike rental shop and cafe Red Lantern Bicycles has launched neighborhood food tours by bike on select Saturdays throughout the summer. This weekend, it's Caribbean and Latin cuisines in East Brooklyn, with a four hour tour that includes stops at four restaurants along the 10 mile route. It's a super cheap option if you're sticking around the city this weekend: $20 includes the bike and all the food along the way.