The Old Bowery Station, which formerly housed a subway entrance, has been a go-to spot for fledgling food makers to showcase their recipes. Street food from around the globe has been a popular model—in addition to Korean fusion—the latest of which means Taiwanese and Chinese noodle soups and dumplings courtesy of Yumpling, which is throwing a two-course dinner in the space tomorrow night.

Jeffrey Fann, a first generation Taiwanese New Yorker, left life as an attorney to start his food business, which threw another pop-up dinner in Long Island City last month. For the Bowery dinner, Fann and his wife have been busy putting together dumpling fillings and cooking the base for the soups, which involves boiling beef bones with spices. Start to finish, creating the soup alone takes about eight hours. 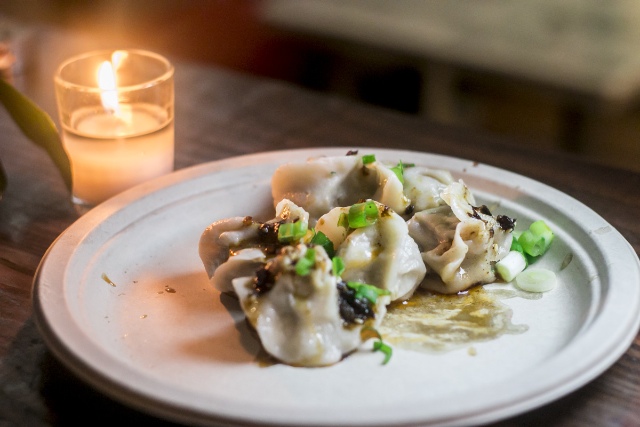 "I grew up in a Taiwanese household and items such as the zong, san bei ji and beef noodle soup were regular flavors growing up," Fann explains. "Between my parents, grandmother and my aunts and uncles, I had a lot of inspiration and tutelage." Fann says his upbringing near Flushing also exposed him to different East Asian cuisines, flavors and dishes, which he now incorporates into his dishes. "The spicy tuna dish is clearly Japanese in influence and during my previous pop-up, we did kalbi jjim baos, which is a mashup of Korean and Chinese," he notes. "The overall theme is quick bites and comfort foods, and the focus there usually ends up on dumplings and noodle bowls."

At the first dinner, Fann gave diners a choice of appetizers, but after getting some feedback, he's decided to offer each diner a sampling of the day's appetizers. For tomorrow's dinner, he's making Zong Zi, a type of rice dumpling stuffed with chicken and sausage and wrapped in a leaf; Avo Spicy Tuna over crisped rice; and Lamb Dumplings in a cumin chili oil with scallions.

Diners chose between two entree options. The first, a Taiwanese Beef Noodle Soup, fortified with a slow-braised beef shank in a soy-based soup with bok choy, shredded sour mustard and wheat noodles. The second option is San Bei Ji (or Three Cup Chicken), garlic and ginger-scented chicken in a savory and sweet sauce over Shanghai noodles.