For as long as anyone can remember, the ground floor of that stately old building on the southwest corner of Bedford Avenue and Grand Street has been a boarded up old ruin. What mysteries lurked behind those darkened windows? Why has nobody turned that prime Williamsburg location into a bespoke artisanal bookmark boutique? How come the Maison Premiere waiters always go there to smoke? These burning questions and more are now being answered, because Ivan Kohut, the owner of Radegast Hall, is turning the place into a Flemish brasserie.

Update: Kohut confirms Witlof will be a brasserie, not a beer hall, as previously reported. It will serve lunch, dinner, and, eventually, breakfast. You'll also find Jenever-based cocktails and beer distillates on the menu, as well as house-made pastries and waffles with seasonal toppings.

John McCormick, a restaurateur and interior designer who owns St. Mazie in Williamsburg and Moto in Bushwick, is currently overseeing a gut renovation of the ground floor space, which was originally a bank operated by one Ladislaw W. Schwenk. The bank was shut down by the state of New York in 1914 after it was discovered that Schwenk accepted $500,000 in deposits from some 2,500 customers for months after he learned his firm was insolvent. 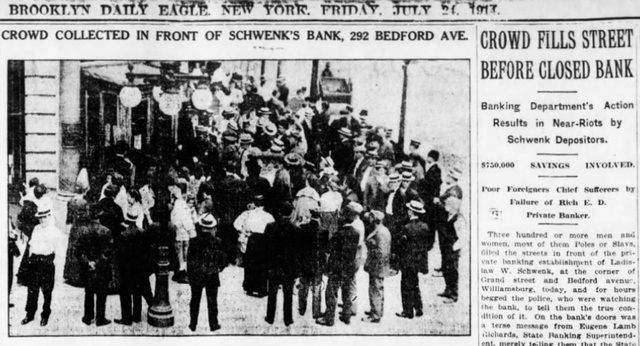 Here's the Brooklyn Eagle's account from the day the bank closed:

Three hundred or more men and women, most of them Poles or Slavs, filled the streets in front of the private banking establishment of Ladislaw W. Schwenk, at the corner of Grand Street and Bedford Avenue, Williamsburg, today, and for hours begged the police, who were watching the bank, to tell them the true condition of it. On the bank’s doors was a terse message from Eugene Lamb Richards, State Banking Superintendent, merely telling them that the state had taking possession of the bank.

Last night, P. H. Maloney, counsel for the Banking Department, T. Arthur Pyterman, an examiner, and two banking detectives, had closed and locked the doors and as soon as the rumor of their action had got about the thickly populated section, a crowd gathered. At 6 o’clock this morning, many of those who work in the nearby factories and storehouses filled the streets and twice small riots occurred as they tried to storm the locked doors of the institution which held their small savings.

With shrill cries, many of the women shrieked that Mr. Schwenk be brought out to them. They demanded, begged, cajoled and even threatened the police who stood before the doors.

“I am poor but I have $50 in the bank,” wailed one poor Austrian woman, who carried an emaciated child in her arms; “my husband is not working. We have no money at home. Can’t I see Mr. Schwenk?”

Schwenk, who operated other failed banks in the East Village and Jamaica, Queens, was subsequently sentenced to over two years in prison. One local paper described all of Schwenk's depositors as "poor people" who "lost all they had."

The building changed hands a number of times (some say the ground floor became a shoe store, and later a Greek Orthodox church) until it finally wound up in the possession of one George Wanat, who bought the building from the city of New York at auction for $22,600 in 1976. He sold it earlier this year—and you may want to just stop reading now, grab a bottle of Scotch, and go walk the streets until you pass out— for $6 million. 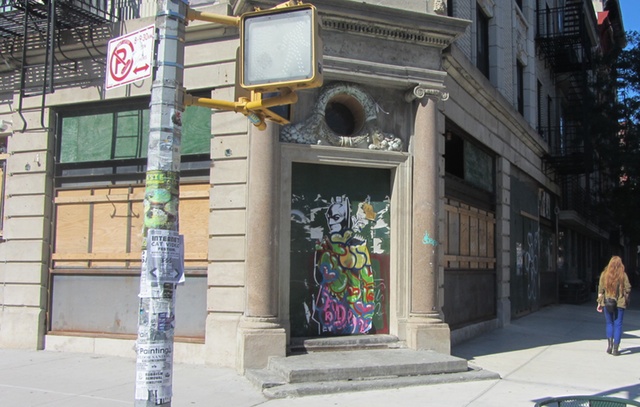 A hardware store most recently used the ground floor space for storage. Now it's going to be Brooklyn's first Flemish “gastro-brasserie," with some 10 Belgian beers and ciders on tap, an open kitchen, and a wood fired grill and rotisserie. If McCormick's previous work is any guide (he also designed Maison Premiere and Spritzenhouse, in addition to the restaurants he owns) it's going to look stunning.

Witlof, which is named after a Belgian endive, opens sometime this fall. In the meantime, if you're in the neighborhood you definitely should check out the gorgeous St. Mazie, which has excellent cocktails, a charming subterranean restaurant, and live music in bar most nights of the week.

#beer
#brooklyn
#new restaurant and bar radar
#southside
#williamsburg
#witlof
#witloof
#original
Do you know the scoop? Comment below or Send us a Tip