Indian Food Ecstasy Awaits At Babu Ji On Avenue B The latest Quick Bites brings us to the East Village for Batata Vada and Gol Gappa!

THE VIBE
Babu Ji, an Indian restaurant that opened at the start of the summer in Alphabet City and has been hopping ever since, takes its name from the Hindi equivalent of what we'd call "The Mayor of [insert street name]", that local character who knows everyone, always has time to chat and share a bit of gossip, and looks out for the block.

Clearly the Singhs—owners Jessi (your expansive chef) and Jennifer (your affable hostess)—are going for a neighborly vibe here, and at that, as well as most everything about this place, they have succeeded and then some.

The windows of Babu Ji are thrown open to the street, and Bollywood films (sound off) are projected on to the wall over the bar, right next to the huge "family" portraits that serve as decor. Large Hindi lettering runs around the space at about wainscoting height, and for the language-ignorant among us function as a nice graphic element. The water glasses and plates are exotically metallic, with an ancestral Babu Ji greeting you from the back of the menu as you take your seat.

If you're drinking beer, just head over to the fridge in the corner and grab whatever kind you want. They're not cheap at $7, but the casualness is pleasing, and evokes the BYOB spirit of NYC's classic Indian-food dives.

If for any reason you're uncertain what the best move is as you navigate the menu—divided into appertizer-ish "From the Streets" and more entree-feeling "From the Pots"—your server will be happy to guide you with both facts and opinions. None of those dreaded "oh, everything's great!" declarations at Babu Ji.

The hospitality can be a but much (you will need to assure several different people at regular intervals that you are happy), and I really wish everything was at least five dollars less expensive, especially since, if you don't control the pace a bit, your dinner happens so fast. I like bang-bang service more than most people, but when you're shelling out about $40 a person, no booze, pre-tip, for a meal that lasts less than an hour, it kind of puts the "bite" into the ol' quick bite routine.

That said, the Singhs have pulled off the neat trick here, of opening a restaurant that feels both fresh and bold and as well as comfortable and familiar, with food so good that locals won't be able to resist, and the rest of us will happily make the journey to sample the remarkable curries and chutneys coming from the kitchen.

THE BITES
Full disclosure: I'm not an Indian food expert. In fact, most of my experience with the cuisine comes from sloppy nights down on East 6th in the 1980s, when you could get two meals worth of stuff for like seven bucks. But I DO know that when I take a bite of something and it makes my eyes roll back in my head in ecstasy, that is an excellent example of food, Indian or otherwise.

The first time the ecstasy thing happened at Babu Ji was with my plate of Gol Gappa, which are these hollow balls made from thin, crisp-fried chick peas and filled with... well, I don't really know, other than "thick spicy and sweet sauces", because you just pop the whole thing in your mouth and oh my god what a flavor bomb. Truly thrilling. 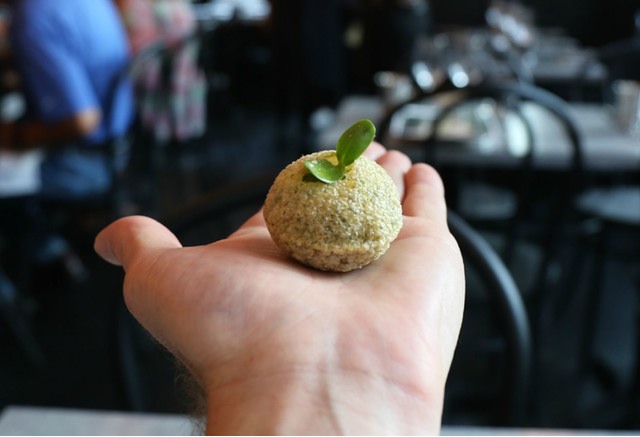 If you want to try and really analyze the contents, get the Batata Vada, which I'm pretty sure features the same chutney palette as the Gol Gappa, but here it's puddled onto your plate beneath some kind of potato-based mountain, on top of which sits a giant, lovely flower. It's a show-stopper presentation that tastes even better than it looks.

At my second dinner I tried Singh's Scallop Coconut Curry, which was apparently a huge hit during the couple's years spent running restaurants in Australia. And I can see why. The bright-yellow curry is fantastically complex (mustard seed and turmeric figure into the equation, per the menu), and hides a generous portion of sweet, soft, uncooked scallops. And if you're a vegetarian, or just raw-scallop-averse, the same curry is also featured in the roasted squash entree.

There are, of course, numerous vegetarian options on the Babu Ji, but I stuck with meats as my mains. If your instinct is the same, I recommend getting the Goat Curry, which is wonderfully gamey and meltingly tender, over the more ordinary Lamb Rogan Josh, the only comparative dud on either night (this latter also had too many "surprises", like big pieces of bay leaf, and a hefty chunk of un-shredded ginger).

The "From the Pots" dishes don't come with a starch to mop up all that sauce, so you have to add to your tab with either Naan (we had the Sesame and Onion Seed variety) and/or the Premium Aged Basmati Sella Rice. If you have to choose, go with the rice, which comes in a large bowl (enough for two) is buttery and flavored with cumin and lemon, and has crunchy bits on top. The Naan is fine, does its job without complaint, but it's nothing that'll get bread fiends excited.

THE VERDICT
Definitely go to Babu Ji, because the food is (mostly) outstanding and the atmosphere convivial and buzzy enough to feel like a special night out. Just don't expect 6th Street prices.

#babu ji
#quick bites
#original
Do you know the scoop? Comment below or Send us a Tip