Some early avocado toast recipes have been going around lately, thanks to a longread on the food trend that won't go away over at Bon Appetit. The article led to the discovery of a 1927 recipe from the San Francisco Chronicle, which featured the pretty boring ingredients of bread and lemon juice. We did some digging around the NY Times archives, and found the Paper of Record hit its own avocado toast stride in the 1960s, writing about the dish several times that decade.

Instead of suggesting adding nothing, like those health-conscious Californians, they suggested adding: hot butter, mayonnaise, and cream cheese. Not all at once, just pick one.

Going even further back, there are a ton of mentions of Avocado Toast and Avocado Sandwiches in the NYPL's expansive menu project. 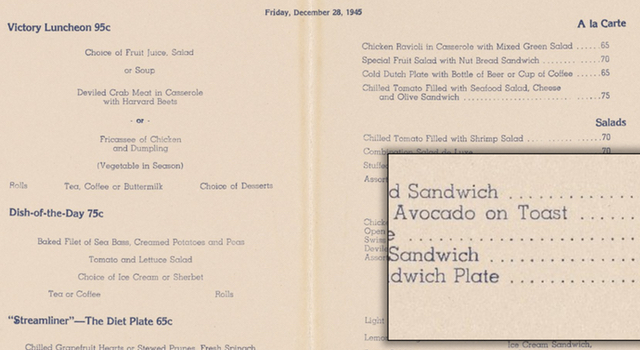