In Search Of Hang Chew's: The Times Square Bar On "The Newsroom"

This weekend brings the season finale of The Newsroom, Aaron Sorkin's kind of controversial HBO show that lifts the curtain to show the behind-the-scenes workings of (fictional) cable news show News Night, starring Jeff Daniels as news anchor Will McAvoy.

One of the main locations in the show—aside from the ACN office, which is actually the Bank Of America building in Times Square—is Hang Chew's, the staffers favorite bar. When Neal Sampat describes the place to co-worker Jim Harper in one episode, here's how it goes:

Neal: There's a karaoke bar down the street we go to. Drinks and appetizers are $3 until 9.
Jim: It's 9:15.
Neal: We send an intern down at 8:55 to order 30 drinks and 4 platters of tuna jerky. The downside's the karaoke but it's the only place nearby that stays open late unless you want to go to the theater district.
Jim: I thought the downside would be the 4 platters of tuna jerky.
Neal: It's an affordable dinner.

If you've got a hankering for some tuna jerky, however, we're sorry to report that Hang Chew's does not really exist. Typical Hollywood move. If it did exist, however, it would be right on the same block as Jimmy's Corner and two doors down from Virgil's, on 44th Street between 6th and 7th Avenues. In real life this is the Times Deli, which also doesn't sell tuna jerky... and only has 2.5 stars on Yelp. 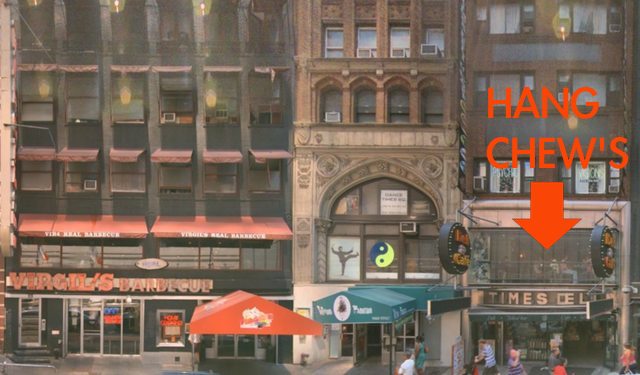 #fake bars
#Hang Chew's
#nyc as seen on tv
#television
#The Newsroom
#original
Do you know the scoop? Comment below or Send us a Tip