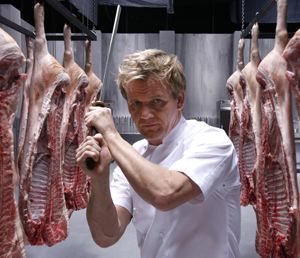 Sure, the stress and time pressures of the kitchen inevitably spark infernos of obscenity, but recent shows like Top Chef and Hell's Kitchen have exposed the salty language of star chefs to untold millions. Last week’s Top Chef episode raised eyebrows for its higher-than-normal profanity quotient, when contestants lit into each other with so much F-bombing “the resulting bleeps ran together like a test of the old Emergency Broadcast System,” according to the Times.

Most audiences seem spellbound by the larger-than-life persona of the macho, trash-talking chef, as embodied by Gordon Ramsay (pictured) and Anthony Bourdain, who says he owes his livelihood to cussing these days:

I’m making a living at it. I do a lot of speaking engagements and sometimes I feel like I’m being paid to curse in front of people who haven’t heard it in a while. I’ve been pushing it and pushing it and have unloaded like a marine in front of a vast roomful of blue-haired ladies, and they seem to get it.

But Culinary Institute of America L. Timothy Ryan insists all this foul language is hurting the profession and turning back the clock to an era when chefs were not considered professionals. Bourdain couldn’t disagree more: “It indicates a real move from servant to professional status. Better than professional. Who gets away with talking like that to their customers?”

Ramsay even called profanity the “industry's language” last month. But white-hot chef David Chang, whose massive New Yorker profile a couple weeks back highlighted his potty mouth, seems repentant: “It’s not like I want to do it, I just want to get my point across and unfortunately I’m not that eloquent or articulate. If I could find a better way – and I’m trying – to communicate, I will change in a heartbeat.” Chang must be out of his fucking mind; half the fun of his tiny new Momofuku Ko is that the open kitchen gives diners a front row seat to watch some colorful cooking fireworks, as seen on TV.