In Defense Of Pizza Bagels

"Also please rain hell on Robert Sietsema for daring to insult pizza bagels." With one Gchat, my entire day was tilted off of its axis. Robert Sietsema, the highly respected former Village Voice and current Eater food critic, published a list of four pizzas from hell on Friday, variations on pizza that in his view twisted the delicate ratio of cheese-to-tomato and turned it "repulsive rather than tolerable." He declares that pizza bagels are "profoundly unsatisfying if you're craving real pizza." Which only confirms that Sietsema has never had a real homemade pizza bagel—because he is dead wrong about them. 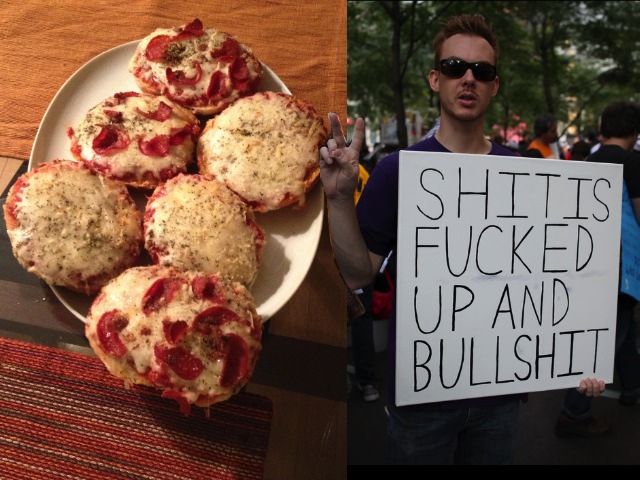 A different batch of my pizza bagels; protester via jamie nyc's flickr

I've been making homemade pizza bagels for friends for the past couple years—at first it was something closer to a joke, an admission that my basic skills as a chef were limited to cheese-based bread mashups. It felt inelegant, but it was in my wheelhouse, and no one complained. Actually, it soon became quite the opposite: those skeptical friends who started out bemused at the chance to reconnect with a long-lost part of their childhood quickly transformed into people actively requesting I make them for dinner parties and TV viewings. Someone once suggested I open a pizza bagel truck, which I'm still seriously considering.

Like most things in the kitchen, it's all about what ingredients you use. While I don't make the sauce from scratch (I use a mixture of a sweet tomato sauce and a garlic/basil one, though I like trying more exotic variations as well), the recipe I've honed over the years involves various spices, Greek olive oil, a melange of veggies (onions, green peppers, mushrooms, etc) and for non-vegetarians, sausage and pepperoni. It's topped by a mixture of various cheese shavings (everything from three blend shredded cheese to actual slices of fresh mozzarella) and plenty of oregano. And I only use fresh bagels from Absolute Bagels, the best in the city.

The recipe is simple because pizza bagels (like good old fashioned pizzas) are their best when they're simple—but just because something's simple doesn't mean it can't be delicious and satisfying, as any amateur who has experimented with making pasta or grilled cheese knows. And the pizza bagels I make have nothing to do with "some stale bagels [I] found in the fridge"—nor am I a harried mom intent on stuffing my friends with processed cheese (although there's NOTHING wrong with processed cheese, long live the Laughing Cow).

I'm not really angry; I pity Sietsema and the scores of other people who don't understand pizza bagels can exist outside of a frozen box. Though I do acknowledge that cliche exists: I, like many suburban kids, grew up snacking on frozen pizza (DiGiorno!) and Bagel Bites, and there is a goofy nostalgia that I get when I tell someone I'm making them pizza bagels.

Pizza bagels also point to a larger issue I have with food snobs (not to single out Sietsema as one): the joy and excitement of cooking should not be limited to those who are already great at cooking. It's always been very, very intimidating for a layman like myself to approach slicing and dicing at home—especially having grown up in a household with a mother who cooked incredible meals six nights of the week, and who stalked the kitchen like a proud lioness. When I was younger, pizza bagels were a gateway drug, a way for me to warily experiment with cooking on my own.

To make a comparison: it doesn't matter if you make a TV show about cops or nurses or lawyers or serial killers. If you have great writing and great acting, you could make a TV show about boring old ad executives and turn it into one of the most compelling shows in the history of the medium. Done with the right ingredients and a whole lot of affection, pizza bagels are the same.

Am I saying that pizza bagels are the Mad Men of foods? Well, in Greek, pizza bagel literally means the pain from an old wound. It's a twinge in your heart, far more powerful than memory alone. So you tell me.

But maybe that is all besides the point: as long as pizza's on a bagel, you can have pizza any time, and any time is exactly when I want pizza.

#bagels
#cooking
#diatribes
#love
#pizza
#pizza bagels
#original
Do you know the scoop? Comment below or Send us a Tip