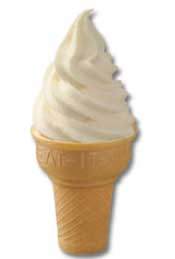 It's National Ice Cream Day! Ronald Regan declared it so in 1984, writing a proclamation that began: "Ice cream is a nutritious and wholesome food, enjoyed by over ninety percent of the people in the United States." He also declared July to be National Ice Cream Month. So, let's enjoy that "nutritious and wholesome food," shall we? After all, he "call[ed] upon the people of the United States to observe these events with appropriate ceremonies and activities." Here is where we suggest you go to do your part as an American today:

Here are five healthier frozen treats, and five more of our favorite spots (but maybe skip the gelato pop today, that's not very patriotic). And there's always the classics: Baskins Robbins has offered up this coupon, and Carvel is giving away some free ice cream today (find a store near you).