IEKEI-Style Ramen, A Cult Favorite In Japan, Lands In NYC

You might think that, with all the great and varied ramen that's hit this town in the past decade or so, we would have exhausted all of our noodles-in-broth possibilities.

But you would be thinking wrong.

Enter E.A.K. Ramen, which opens this Wednesday in the West Village and brings a ramen style, IEKEI, that's apparently huge in Japan right now (under the name Machida Shoten, E.A.K. operates some 40 stores there and consults for/franchises 400), but hasn't been seen yet in our city. Gothamist was invited to a preview event last week and, based on eating everything they threw at us, we have to agree that E.A.K. offers a truly new and exciting bowl of noodles.

The IEKEI style is basically a combination of Tonkotsu (fatty, milky, pork-based) and Shoyu (soy sauced, clear, chicken-based), so the broth here is both thick and surprisingly nuanced, with a stunning depth and complexity of flavors. That's especially true in the "Zebra" version, which also adds butter and roasted garlic oil into the mix (this dish was amazing, by the way), but is also in evidence in the signature E.A.K. bowl, as well as, to a lesser degree, the Oh So Hot! spicy miso rendition. There will also be vegetarian and vegan versions on the menu.

Other things that make E.A.K. Ramen unique: the noodles are much thicker than you find anywhere else, like udon-thick, but still with that classic egg-noodle chew; the greens are spinach rather than the standard tangle of scallions, which adds a smoothness to the proceedings; and the ajitama—or marinated, soft-boiled egg—is served whole. Plus, the nori is branded, which comes across as charming rather than aggressive. 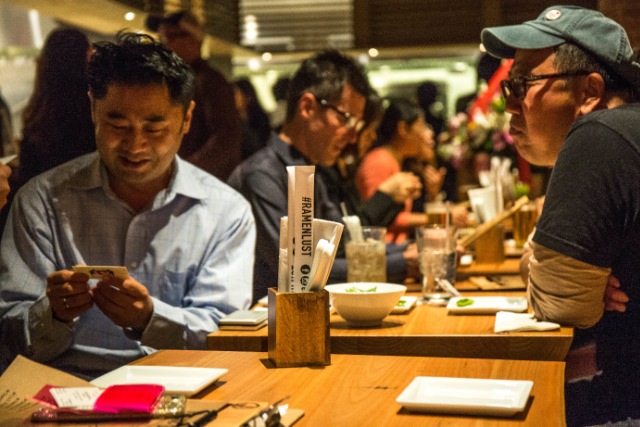 Speaking of branding, there's a lot of it here, particularly of the social-media-bait variety. The catchphrase "But First, Ramen" is printed on multiple surfaces, as is #ramenlust including, cleverly, on the bottom of your Zebra Ramen bowl. All of this fits neatly with E.A.K.'s unapologetically contemporary sensibility. Traditionalists may dismiss this place at their loss: these E.A.K. chefs can cook.

We were treated to a number of other non-ramen dishes as well, most of which were also quite good. The Ginger Gyoza arrives in a dramatic, sizzling spiral. The Gobo Chips (crisp and incredibly salty) are piled high on a cutting board. An egg is added at the table to your skillet of Fried Rice, followed by much stirring from your server. The Superfood Salad comes in a canoe.

The restaurant itself takes over the former Kin Shop space, and it appears as though the layout is basically the same. All signs point to this place getting crazy popular, so we suggest getting here sooner rather than later. Even in the summer's heat, E.A.K. Ramen is a must for dedicated noodle-heads.