Theatergoers in search of a pre-curtain bite at this summer's Shakespeare in the Park won't have to travel far. A low-key snack bar, Public Fare, opened up once again inside the Delacorte Theater, serving picnic favorites like hot dogs, sandwiches and frozen treats. 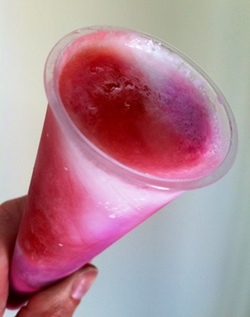 Smaller snacks and desserts include a selection of Ciao Bella gelatos and sorbets ($4), plus a new addition: Ice Push-Up Pops ($2) in Lemon Lime, Yogurt N' Berries and Watermelon N' Cracked Pepper flavors. Wine ($8-9), beer ($6-7) and non-alcoholic beverages are also available and a 4 p.m. to 6 p.m. Happy Hour on Fridays means $3 draft beers and $5 wines by the glass.

Also new this year are pre-order picnic packages like the Picnic in the Park (sandwich, cookie, snack and a beer/wine for $21.50) and Sweet Treat Chilled (gelato, sorbet or push pop and wine/beer for $10).

The stall is open Wednesdays through Sundays until 5 p.m. with an extra hour until 6 p.m. on Fridays. On performance nights, the cafe stays open until 8:45 p.m., so you can throw back a few bottles of Brooklyn Lager before taking in some high art. The Public Theater's Shakespeare in the Park season began at the end of May with The Comedy of Errors, which runs through June 30th, followed by a musical adaptation of the Bard's Love's Labour's Lost, running July 23rd through August 18th.