Two years ago, Ice & Vice went from mobile food darlings to bonafide brick-and-mortar sensations with their East Broadway scoop shop. Their bold approach to ice cream flavor design is now on display in Times Square, where owners Paul Kim and Ken Lo have debuted an ice cream kiosk that's as brave and bold about frozen sweets as it is about supporting organizations that are feeling anxiety under the current administration.

The "I Scream" kiosk—which opened a little over a week ago in a pedestrian plaza off Broadway between 43rd and 44th Streets—not only brings the Ice & Vice pizzaz to a new population but, even more importantly, directly impacts threatened groups with a donation of sales to different organizations. The ACLU, Planned Parenthood and local organizations including Harlem Grown are the beneficiaries of 5% of all ice cream sales at the kiosk, which also triples as a space to "scream" frustrations and motivations related to the current political climate via a daily changing call to action written on the back of the kiosk.

Graphic designer Chelsea Lipman conceptualized the idea for the kiosk after attending the Women's March, and later finding herself feeling helpless about what to do next. She came up with the "I Scream shop" idea and pitched it to the Times Square Alliance, which brokered a deal with Urbanspace to bring Ice & Vice into the operation.

"We completely jumped in," Lo told Gothamist. "Now that we've built Ice & Vice we have a larger platform to do more meaningful things. We were also in the exact same boat as Chelsea, we wanted to do something more. We have a diverse employee base and we're minority owners...what can we do? The only thing we know how to do is make ice cream." 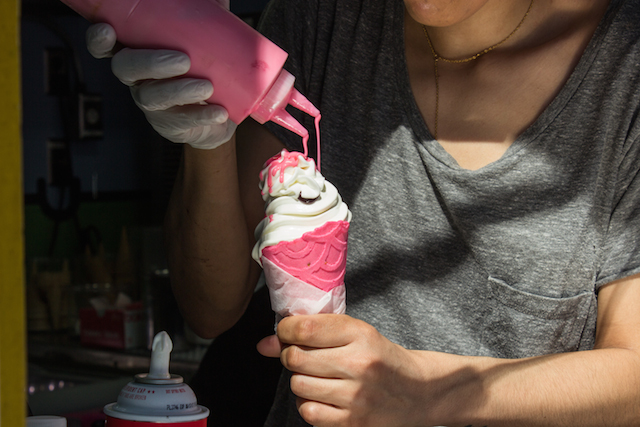 And so that's what they did, creating flavors that speak to the social justice movement they're promoting with the charitable beneficiaries. The "No Borders" sundae ($9) is a blend of Mexican and American ingredients, including chunks of Mexican chocolate brownies with dulce de leche and cinnamon puffed amaranth.

Another sundae, the "No Censorship," is a nod to free speech and the free expression of ideas without fear of retaliation. "It plays on the fact that no matter what your opinions are and what you say, the beauty of America is that we have freedom of speech," Lo explains. "The concept behind the sundae is completely dark with just a little pop of color. That's to represent that how much you try to strip away from us, there's always going to be that light and that color that breaks through."

By and large, the reaction to the new ice cream initiative has been positive, but Lo says their Lower East Side shop has fielded angry calls from people who presume that their business is anti-Trump.

"They weren't exactly death threats, but they were negative and accused us of being anti-Trump. They started berating us for doing something against the President, which is completely not our intention," Lo says. "These are our beliefs and we're not saying that this is anti-Trump. Both Paul and myself are the children of immigrants, so for us this means something."

Neither Lo nor his team seem swayed by the vocal minority who are misunderstanding their intentions—and customers excitedly noshing on bright pink "No Hate" sundae cones certainly aren't complaining. Customer Alex Yang, who swung by with colleagues during a break in his workday, had this to say: "I feel better about eating ice cream now."

#ice and vice
#ice cream
#Times Square
#original
Do you know the scoop? Comment below or Send us a Tip