Some of the best things are born out of necessity, like a desire to take your children out for ice cream that isn't from a chain or a truck. That's what led husband and wife team Nicholas Larsen and Petrushka Bazin Larsen into the world of independent business ownership and to Sugar Hill Creamery, the ice cream parlor they'll open in Harlem on July 29th.

After a decade of living in Harlem, the couple felt disappointed by the abundance of Baskin-Robbins chains—"I went to Baskin-Robbins with my mom, that was our thing, but Baskin-Robbins is not the same anymore," Petrushka Bazin Larsen says with a laugh—and wanted a place they could take their two daughters when the mood struck. As it would happen, that opportunity would come about after Telepan, the longtime Upper West Side restaurant at which Nicholas Larsen had been serving as general manager, closed last year.

"I got offered a new management position and I walked out of the meeting and called my wife and was like, 'I can't do this,'" he told us. "Let's do the ice cream shop, let's go for it."

They came across a space at Lenox Avenue a few months later and by the spring had launched a Kickstarter campaign to raise additional funding for the shop. Local blog Harlem Bespoke picked up the campaign and within a day the couple had raised 20% of their $12,000 goal.

"It was tremendous. The majority of that support came from our neighbors, from Harlem residents, from the church community that we're a part of and also some of our colleagues and friends from the restaurant industry," Nicholas Larsen recalls. "Without that level of interest it could damper things, and it really gave us the motivation we wanted to finish the project."

While engaging with their neighbors, the couple were told about Thomeforde's, an ice cream shop and soda fountain that operated at West 125th Street at Nicholas Avenue from 1903 until 1983.

"I was chatting with some folks who are octogenarian Harlemites and they were talking to each other, 'Do you remember Thomeforde's?'" Petrushka Bazin recalls. "Everybody had all of these positive associations. That gave me chills, because that's what I want this to be. This place where everyone's like, 'Yes! It feels so good to be there!'" 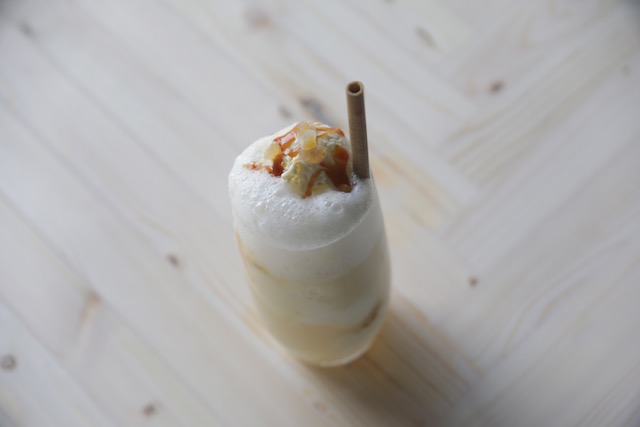 Joey Stallings, who currently works for Andrew Carmellini's Lafayette restaurant in NoHo, joined the team in recipe development, which will include a rotation of eight or more flavors dependent on seasonality (berries for summer, concord grape/quince for fall, for example) and what the neighborhood responds to.

There will be 12 seats inside the cafe along a row of banquettes and tables, with seating also at an ice cream bar and on a platform near the windows, which will be wide open to the Avenue when the weather is nice.

Speaking of location, yes, the couple is aware that their shop isn't actually in the Sugar Hill neighborhood of Harlem, which is further to the north and west.

"I have a lot of friends who are from Harlem, who've been here 35 plus years, so when we were bouncing names around, like, 'This is the one that we like...what do you guys think?' And they were like, 'No! It is not Sugar Hill, you can't do that," Petrushka Bazin remembers.

For the couple, there's a sentimentality to the name and the neighborhood, which is where they first lived upon moving to Harlem. But they're sensitive to things like the controversial "SoHa" rebranding of Harlem by real estate entities and they're aware that there may be some sensitivity around the neighborhood, which is actually Mount Morris Park.

"We're not trying to change a neighborhood," Petrushka Bazin says. "We hope that Sugar Hill Creamery will be in other neighborhoods, not just Lenox Avenue and 119th Street."

"We're going to open up the second location in Sugar Hill, we promise," Nicholas Larsen concludes.