Beloved ice cream purveyors Ample Hills have announced a new location on Gansevoort Street, just a stone's throw from the High Line's southern entrance. The new outpost will be a shared space with pie-and-comfort-food spot Bubby's High Line, and the two businesses already have plans to collaborate.

"It's a really exciting spot to be in, we jumped at it," Ample Hills Co-owner Brian Smith told Gothamist Monday. "We've always been a big fan of Bubby's and the pies and the brand, and they reached out to us because they have a 400-square-foot coffee bar area in the back of their restaurant." Smith said Bubby's invited him in to create a "mini Ample Hills," which is now poised to open in early May.

Pie shakes, pie and ice cream plates, and exclusive sundaes will make their way onto the new shop's menu, and Smith was quick to confirm that he and Bubby's chefs have been making big plans together. Ample Hills will also create an entirely new dessert menu for Bubby's—one loaded with ice cream. 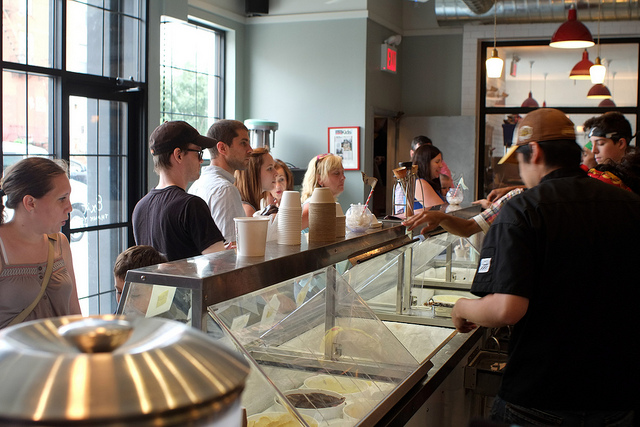 When it comes to managing the High Line's droves of tourists, and what will surely be the longest lines in Ample Hills history, Smith has hopes that a special grab-and-go freezer of pints of ice cream will help ease the gridlock.

And as with all Ample Hills locations, the new Gansevoort Street outpost will have its signature, exclusive flavor. Smith hasn't made a final decision on the specifics but he says, "I've been looking for inspiration either from the Meatpacking District. Something bacony, or possibly something more brunchy. More like french toast, pancakes, something like that. It might end up as some kind of pie, chopped up mixed-in. We're still playing with that, but there's a lot of good elements."

The new Ample Hills will be located at 73 Gansevoort Street // Open 7 days a week, 11 a.m. until late // Ample Hills menu

#ample hills
#bubby's
#high line
Do you know the scoop? Comment below or Send us a Tip
A new Gothamist is coming! We’ve moved comments over to our beta site. Click here to join the conversation and get a preview of our new website.