"I'm sure it is delicious. My God, have you see pictures of it?" - Cronut™ aficionado Julia Cristafano, on the Cronut™.

Today was different. It felt different. A small hummingbird rose me from my slumber with a gentle kiss upon my forehead, chirping softly into my ear—"It's time, Marc, the Cronut™ awaits." I was tasked with procuring the Gothamist HQ Cronuts™. I knew what had to be done. But first, some background.

By the time I arrived, around 8 a.m., the line was down the block and around the corner. Two things immediately became apparent: I felt uncomfortable being there and there was a lot of athletic wear: tank tops, running shorts, yoga pants. This is a not particularly untenable paradox, as it is early in the morning and Cronuts™ are a thing you might want to burn off through exercise. But you can feel how much all of the passerby hate you for being there. "You are stupid," they yell at you with their eyes. "Cronuts™ are stupid! Get off my sidewalk!"

After a several minutes of awkwardly standing around, unsure whether I should get on line or talk to other humans, I found my place in the back. They let about 15-20 people in at a time, so the line moves in chunks, much like an amusement park. It is less fun than an amusement park. Monica Lee arrived "just before 7 [and] there was like 50-60 people in front of me—not too crazy." By 8:30, she was next to head in. Lee had tried yesterday, getting to the bakery around 9 a.m. and "the woman basically laughed at [her]." 9 a.m.—that's cro-nuts!

Julia Christafano and Kelly Carr were in line behind me, stopping by on their way to work. Honestly, they seemed quite cavalier about the Cronut™. They intern around the corner and had noticed the line before. "They seem a bit like crazed fans," Carr said, "and we thought that we might as well try it." Though composed, they, like everyone towards the back of the line, were concerned about the supply.

Cronut™-provoked existential angst culminated in a confession: "I don't even know what it is," Carr said as my gag reflex kicked up. "It could be horrible." Carr is from London, which is not New York. "I took a photo to show my friends of this queue because I couldn't believe that people would queue for food. This wouldn't happen in London. It's such a New York thing. No Starbucks even have queues." For more on London Things, see "queue." 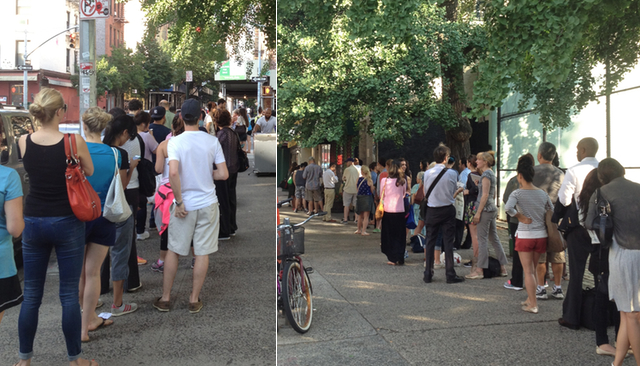 Carr arrived slightly after I did, and was joined by Christafano minutes later. They were later joined on line by another intern. The woman behind them was not pleased. "I've been waiting for a while and now two more joined you. That's not fair. You're here for the same reason I am," AKA CRONUTS™. The girls were a little taken aback, unsure of how to respond. "We just wanted to sit together," Carr responded. "Are you going to sit down?"

"No, I am not going to sit down. I want a Cronut™." The girls asked if the woman would like to go in front of them. "Yes," and she did. Things were tense, but Gothamist reports that all parties involved got their fucking Cronuts™.

Aside from the verbal altercation, it is a normal line. At the end, there were two men chattering and yelling intermittently, which underscored probably the primary criticism of all things Cronut™-related, the wait, et cetera: stupid, expensive, bougie excess. It's not an unfair assessment, but it seems reductive at the expense of a more thoughtful critique.

The Cronut™ shares a lineage with equally-as-disdained small-batch, artisanal foodstuffs and crafts. It's been well established that these things are Very Popular and usually "Brooklyn." Not only are they expensive, they all carry with them a certain amount of cultural and socio-economic baggage, making it easy to make fun of but also legitimately problematic; the latter gets lost via the former.

A $5 Cronut™ after an hour-long wait may very well be crazy, but I could posit that so is eating a Krispy Kreme™ doughnut made in North Carolina and shipped to a New York 7-11™, sold to you by an indentured servant. Something about a Cronut™ reflects an actual pricing and availability reality that has otherwise been systemically dismantled by larger forces (food corporations, cheap sugar substitutes, et cetera).

Some people cannot afford a Cronut™, let alone wait on line—they have to go to work. Division of labor isn't necessarily the problem; it's a feature in all economies. It's the quality and quantity of labor—what the reality of that work is. It doesn't suck that Cronuts™ exist, it sucks that Hostess exists. It doesn't suck that people are waiting on line for a pastry, it sucks that there is a line and not, say, many bakeries selling many croissant-doughnuts. At a certain point, money (and how it's used) can (and must) be a form of political expression. I am less inclined to criticize a superficial problem (that this pastry exists and people like it) at the expense of more fundamental ones (say, the availability and price of Ho-Hos). 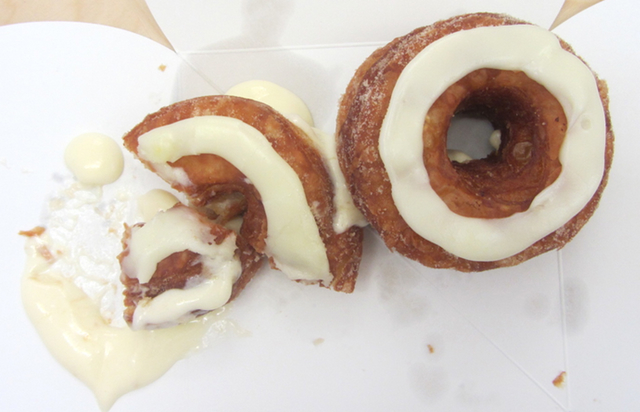 Trying to split two Cronuts™ up between 8 people is difficult. (Gothamist)

All in all, I was in and out of the bakery, treats in hand, with relative ease. At that point there was no line at all. Customers were simply opening the door and just walking in. Just like any old bakery! By 9:10 a.m., the Cronut™ line had all but disappeared, like nothing but a whisper in the wind, threatening briefly to take us all with it.

#bakery
#cronut
#cronuts
#dominique ansel
#original
Do you know the scoop? Comment below or Send us a Tip